With a high and consistent ballistic coefficient, match-grade accuracy, and controlled expansion for maximum terminal performance across all hunting distances, the new Hornady Precision Hunter has it all…

There’s no question about it—serious big game hunters and target shooters are reaching out like never before. The envelope of what was once considered as “long-range” has gone well beyond the 300- to 400-yard mark. Clean and ethical 500+-yard shots on large game happen every year, and hardcore target shooters routinely engage in the half-mile showdown. Much of the credit goes to rifle enthusiasts honing their shooting skills, but so, too, has technological developments paved the way for long-range accuracy.

The problem is, what makes for a phenomenal-performing long-range target bullet doesn’t necessarily make for a desirable long-range hunting bullet. Stability, ballistic coefficient (BC), and terminal impact performance (weight retention and expansion) are all factors that must be weighed. The old saw, “There is no free lunch,” certainly applies in this arena. A streamlined, high BC Open Tip Match (OTM) bullet, for example, capable of pinpoint accuracy at 800 yards can have unpredictable (and possibly undesirable) impact performance on game animals. A hollow point bullet designed for controlled expansion, on the other hand, can perform fabulously with regards to impact performance, but the necessarily large tip required to initiate expansion removes this relatively low BC projectile from most long-range shooters’ contender list.

When polymer-tipped bullets came along, they effectively spanned this performance gap, delivering a bullet with a higher ballistic coefficient while providing for more controlled and predictable expansion. The only problem now was the quality of expansion across the hunting range spectrum. 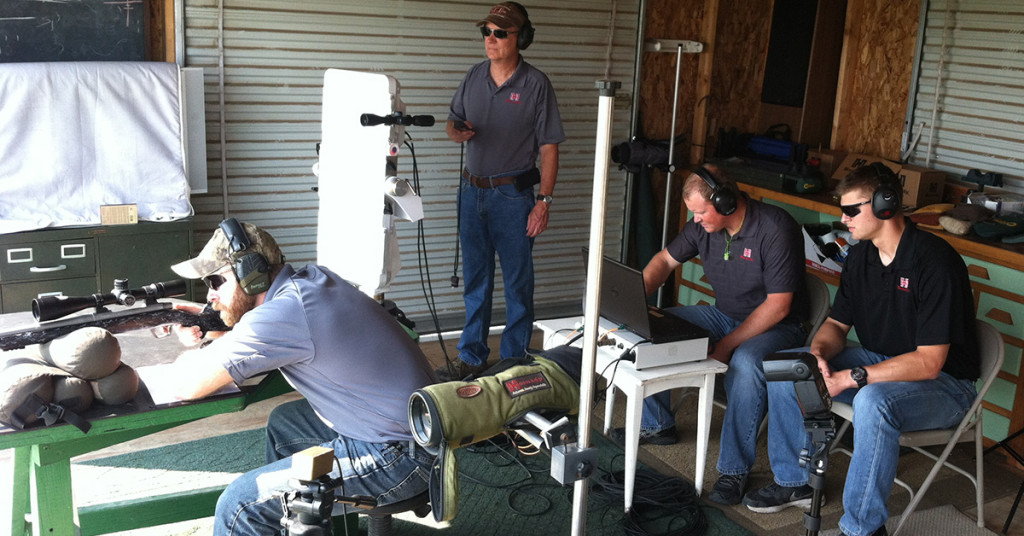 A few years ago, the engineers at Hornady set about to solve that issue and come up with an extended range bullet with lethal impact performance that covered all hunting ranges—from up close to way out there. The caveat (which made their job more difficult but ultimately led to a huge technological leap in ammunition design) was that said bullet would have to deliver match bullet accuracy along with a high ballistic coefficient.

Quite a tall order, but the challenge was accepted and the mission accomplished.

Beginning with a polymer tip mandate, the Hornady crew looked at the key variables to ensuring controlled bullet expansion and high weight retention—the primary ingredients for creating large and deep wound channels at any distance.

Manufacturers can design bullets to perform predictably under specific conditions. As an example, a bullet can be made to expand and retain weight for devastating effect at high velocity (under 400 yards). Once velocity drops precipitously (beyond 400 yards), that same bullet will likely require hard impact (such as against bone) to really open up. That is not what you want in a hunting bullet. You want a bullet that begins expanding on impact with soft tissue to create the widest possible wound channel and with enough weight retention to make that wound channel as long as possible.

To that end, Hornady developed the ELD-X bullet. The acronym stands for Extremely Low Drag – eXpanding. 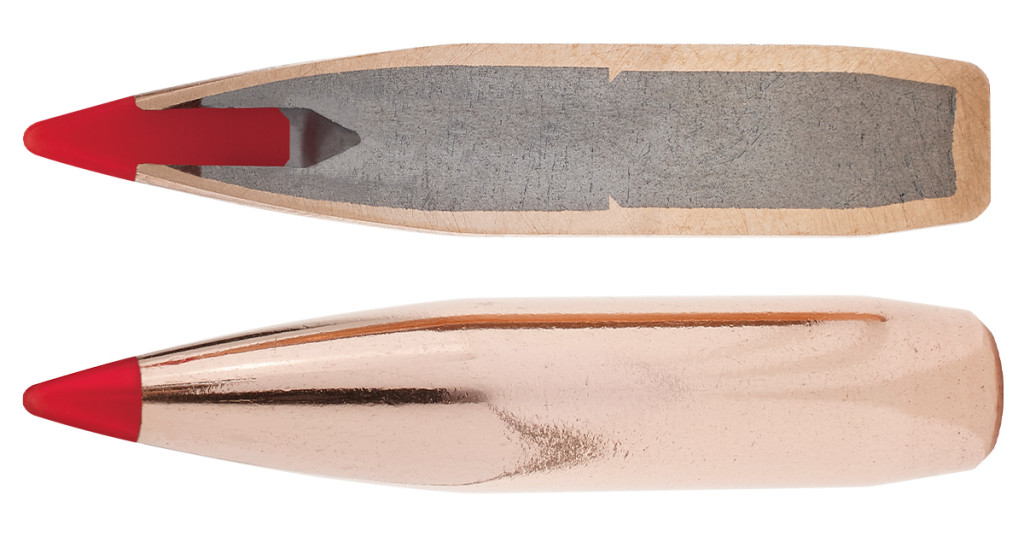 The ELD-X starts with a precision-swaged lead core seated in Hornady’s proprietary AMP (Advanced Manufacturing Process) technology jacket. The value of the AMP technology is that it offers nearly perfect concentricity, which ensures bullet stability along the flight path and assists in maintaining a high ballistic coefficient. This combination, along with the polymer tip, delivered the accuracy and high BC requirements Hornady sought to fill.

The jacket itself features variable wall dimensions, staring with a thick wall along the bullet shank, tapering to a thinner wall along the ogive (the curved area from the tip back to the bearing surface). This thinner wall construction along the ogive allows the jacket to roll back upon impact at higher velocities while the thicker shank wall and high Interlock ring (a ring inside the jacket that locks the lead core to the jacket) keeps the lead and copper jacket together. The average weight retention at these distances is 50-60 percent.

That’s the close-range, high velocity impact performance of the ELD-X. In the 400+ yards extended range, the ELD-X performs quite the same, expanding immediately upon impact and mushrooming in traditional fashion to create wide and deep wound cavity. As expected, weight retention is higher at extended ranges, coming in at an average of 80-90 percent of the original bullet weight.

Check controlled expansion at all shooting distances off the “must-have” list.

At this point, one would think Hornady’s mission to develop a match-grade, high-BC bullet with best-in-class terminal performance to be complete. Interestingly, a strange thing happened on the way to building a better bullet.

During the ELD-X R&D phase, the Hornady engineers employed Doppler radar to chart ballistic performance instead of the conventional use of acoustic devices and chronographs set at specific distances. This gave the engineers a fuller picture of the bullet’s performance with a nearly infinite set of data points to look at. What they discovered both puzzled and surprised them.

As it turns out, the team found a notable drop in ballistic coefficient once the bullet passed the 100- to 150-yard mark. This held true not only for the polymer-tipped ELD-X, but also the polymer-tipped bullets from other manufacturers used in their tests. In the end, it was determined by using Doppler radar that the polymer tips on high velocity, high BC bullets heat up and deform not long after leaving the barrel. This causes increased drag and lower BCs beyond the 100- to 150-yard range. 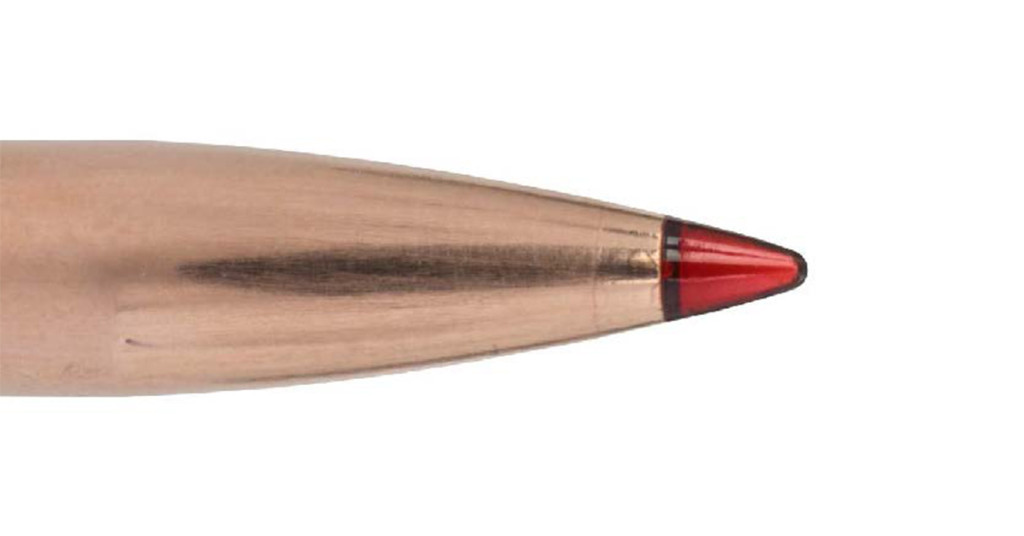 To fix this problem, Hornady worked to develop a new class of polymer tip—called the Heat Shield—with a melting point 2.5 times greater than conventional polymer tips. Furthermore, the molding process of the Heat Shield tips provides consistent diameter and shape. Back to the test range, the new Heat Shield tip allowed the ELD-X bullet to maintain a consistently high BC along the entire flight path.

Funny how a change in measuring devices uncovered a problem no one knew existed.

As a side note, lest you worry about your low- to moderate-BC ammo sporting conventional polymer tips, don’t. Doppler testing showed that tip softening and deformation does not occur on this class of ammunition because the initial high velocities are not sustained long enough to cause heat damage and tip deformation.

So, what do you once you develop the highest-performing hunting bullet ever? Make the ultimate hunting cartridge, of course. 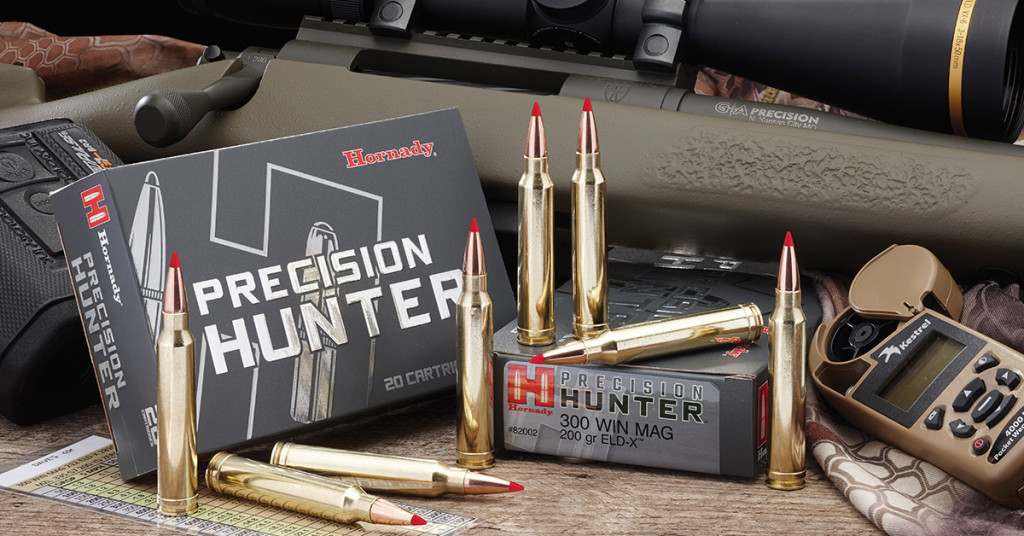 You know the “Precision” and the “Hunter” parts already. To those, the Hornady engineers worked up a factory load using a clean propellant loaded to a uniform capacity for a precise and repeatable burn. This consistency combined with the unparalleled performance of the ELD-X bullet means you’ll be hard-pressed to find or work up a better all-range hunting cartridge.

“The Ultimate in Accuracy and Knockdown Power” may sound like a bombastic claim, but when you’re talking about muzzle-to-way-out-there predictability in aerodynamics, high ballistic coefficients, and terminal performance, we’ll put our marker on the new Hornady Precision Hunter ammo every time. 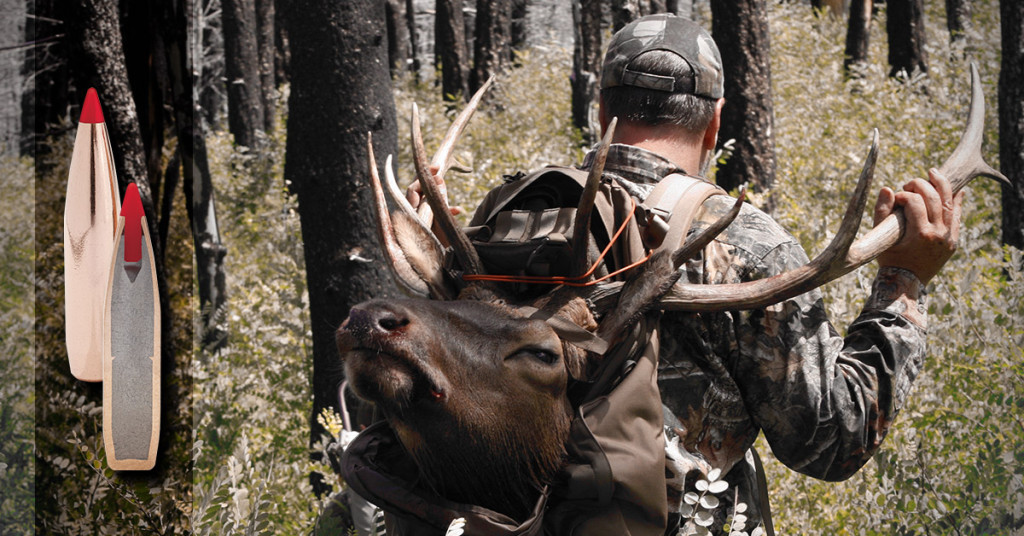