What will it cost for a top-quality rifle-scope? Less than you might think!

by the Wayne Van Zwoll; promoted by Styrka 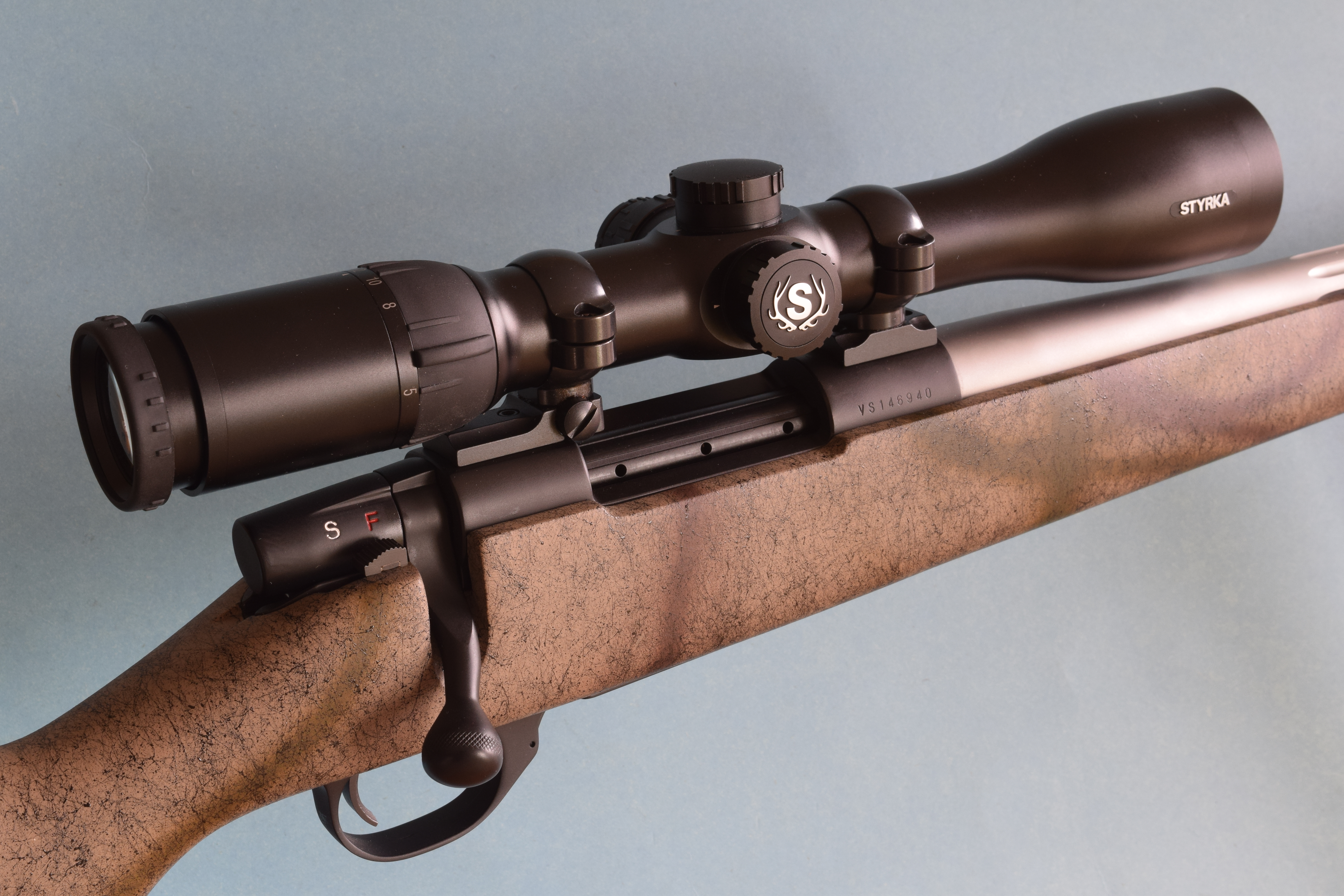 I paid more for my first scope than for my first deer rifle. You can still do that, but you might be squandering cash. At $39 my 2 1/2x Bushnell seemed a costly sequel to a $30 firearm. Rifles have since climbed well into four figures. And scope prices now leave me aghast. Well, most of them.

Styrka – a Scandinavian term for “strength” – is a fresh label. But its 2016 debut belies a deep history in optics manufacturing. Parent company Celestron has long been famous for its telescopes. Glass that helps us peer light years into the past has all the qualities hunters need in a sight…and then some!

Scopes appeared on rifles many moons after Lippershay and Galileo came up with optics to help them see stars. By the 1850s target shooters were squinting through barrel-length tubes at fuzzy images. Around the turn of the century, the J. Stevens Tool Co. began manufacturing scopes. Celebrated barrel-maker H.M. Pope [would] come to favor a 16-inch 5x that cost $24. In Germany, Zeiss followed its 1904 “prism” scope with fixed-powers and variables pioneered by Hensoldt (acquired by Zeiss). In 1926 they listed for $25 to $66. That year, Henry Ford’s Model T automobile sold stateside for $360, so these were expensive optics! In 1930 Kentuckian Bill Weaver, age 24, bucked inflation with his Model 330 scope. It sold for $19 with mount. The 10-ounce sight had a 3/4-inch steel tube with internal adjustments (1-minute windage, 2-minute elevation). A 4x 440 came three years later, when Bill moved shop to El Paso, Texas.

Meanwhile, Zeiss engineer A. Smakula found lens coatings of magnesium fluoride reduced light loss from reflection and refraction, a 4-percent drain on brightness at each untreated air-glass surface in the scope. Oddly, this important discovery didn’t bump the cost of German optics. In 1939 Hensoldt/Zeiss prices had edged up an average of just $11 in 15 years! 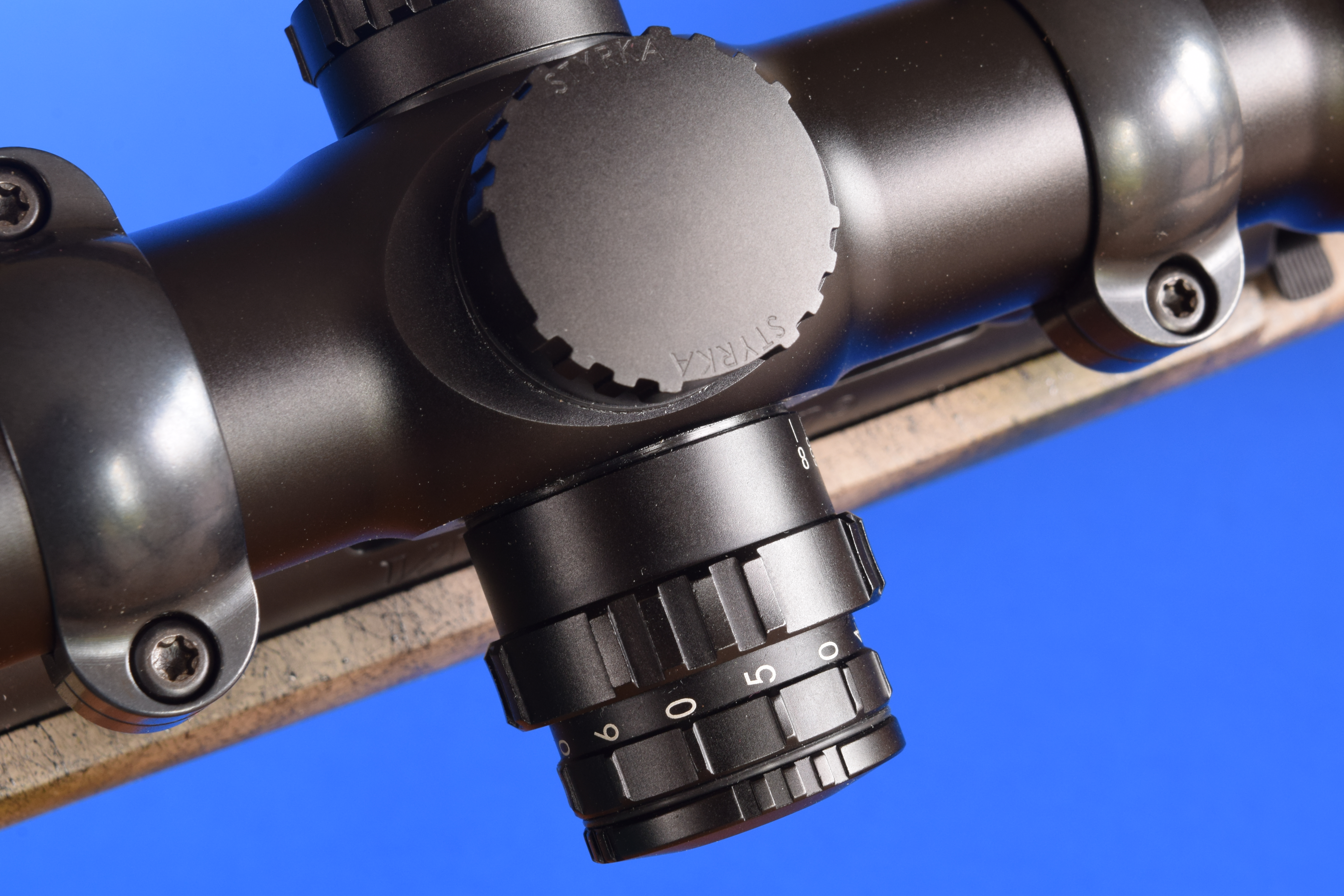 The illumination unit (off detents between brightness settings) is paired with the focus/parallax dial.

In a strange twist stateside, scope-makers proliferated during the Depression.

Firearms companies also put their brand on optics. World War II finished many of these enterprises. But Leupold & Stevens, founded by German immigrant Frederick Leupold in 1907, entered the field with its Plainsman in 1947. Like other scopes of that day, it fogged. Replacing air with nitrogen in the tube, Marcus Leupold built a fog-proof scope in 1949. By then 7/8-inch steel tubes were giving way to 1-inch alloy.

Innovation outran price hikes. Leupold’s Mountaineer cost about what a Zeiss 4x had 15 years earlier, before the war! Constantly centered reticles followed. Until the 1950s, adjusting W/E dials sent reticles “off in a corner.” So clever engineers put an erector pivot at the tube’s rear, where the reticle was. In 1962, the year after Leupold announced its Vari-X 3-9x, Lyman began fitting its All American scopes with Perma-Center reticles. Still, in 1958 a 4x Kollmorgen Bear Cub listed at just $59.50, just $6 more than a 4x Noske in 1930! Weaver’s hugely popular K4 sold in the early ‘60s for $45. Bushnell had three variable scopes, starting at $79.50. 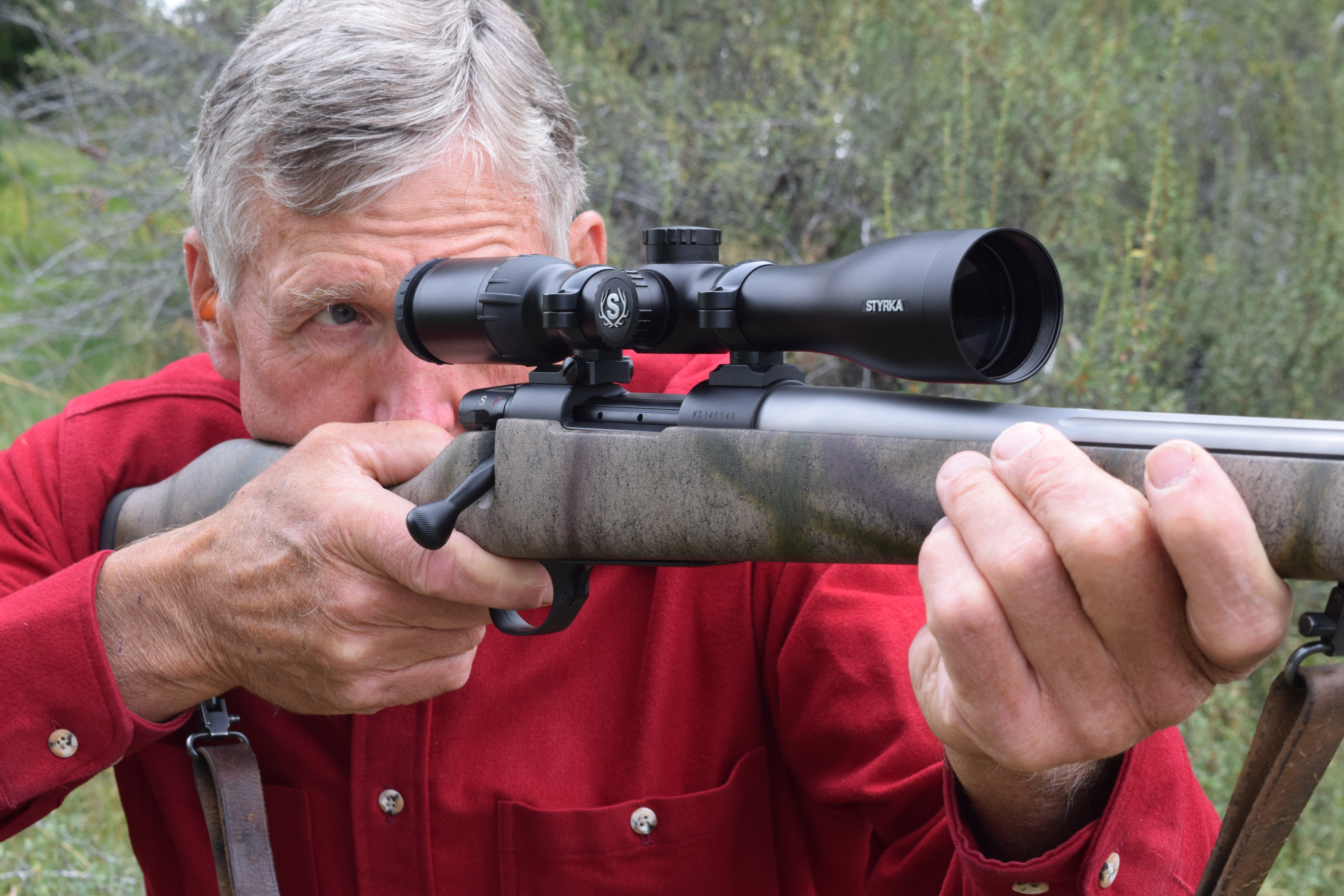 Sleek of line, the 21.4-ounce illuminated 3-12×42 has an ideal power range for big game anywhere!

Scope prices now top $3,000, about what a new pickup cost when I started driving. Elimination of iron sights on many rifles and the assumption that hunters must be able to hit at extreme range give the scope industry leverage. But optics are heavily discounted. Thank CNC machining, and worldwide access to cutting-edge materials, processes and technology. Price ranges are wide too, and bargains abound. As at Styrka.

Styrka’s top-shelf S7 series comprises three scopes: 1-6×24, 3-12×42 and 2.5-15×50. All feature 30mm 6061-T6 aircraft alloy tubes. Choose a standard or illuminated plex reticle or, in the 3-12x and 2.5-15x, a BDC reticle. The battery for illuminated scopes is in the brightness dial outside the focus/parallax dial standard on all models. Multi-coated lenses are edge-blackened. Quarter-minute W/E graduations nudge erector assemblies of machined brass, for precise, repeatable adjustments across a 60-minute range. Styrka designed these scopes with a generous 3.8 to 3.9 inches of eye relief, so recoil won’t plant the fast-focus eyepiece in your brow. Of course, these scopes are nitrogen-purged to prevent fogging. They’re also waterproof. Tests include submersion in a meter of water for 30 minutes. 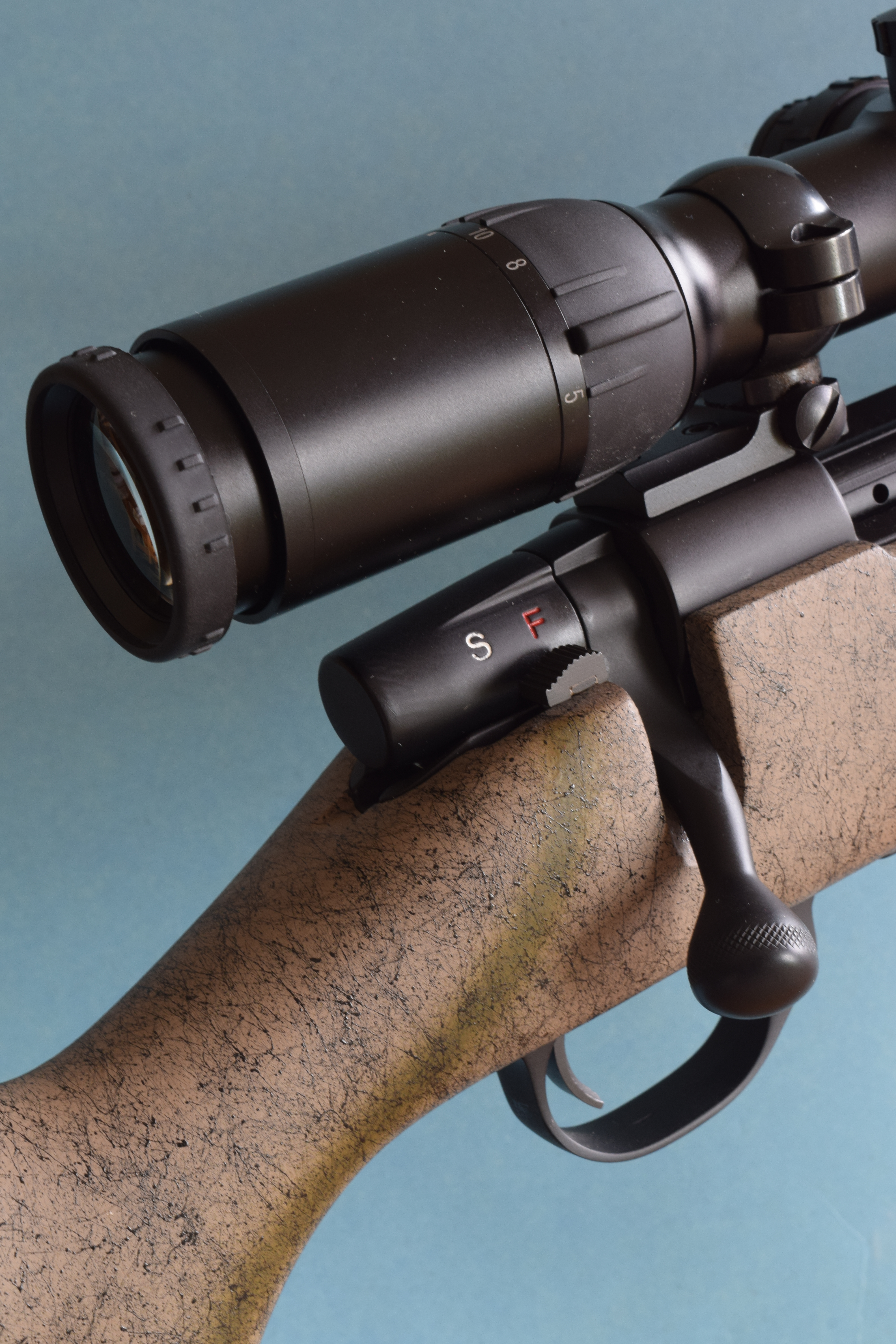 Styrka catalogs two other scope lines. Like the S7, they have rear- or second-plane reticles, which appear one size across power ranges. First-plane reticles grow and shrink with power changes. Perversely they’re hard to see at the low magnification you’d use for quick shots in cover; at high power they hide small, distant targets. Advantages of first-plane reticles: They stay one size relative to the target, so make ranging easy at any magnification; and there’s no danger of reticle shift. S5 scopes – 1.75-5×32, 3-9×40 and 4.5-14×44 – boast almost all the features of the S7, but in 1-inch tubes. There’s no focus/parallax dial on the 1.75-5x, no illumination in any. You do get a Mil Dot reticle option in the 4.5-14x. The S3 family is similar. Only its 4-12×50 has a focus/parallax knob; the 2-7×32 and 3-9×40 are parallax-corrected at 100 yards. A 4×32 fixed-power, I’m told, will soon be dropped. So sad. Evidently I’m one of few hunters who value the lightweight, simplicity and trim profile of a 4x.

Not that Styrka ignores nimrods who shoot in the woods. Its S3 red dot sights comprise both tube and open/reflex models with unlimited eye relief and a choice of two dot sizes. They’re parallax-corrected to 50 yards and adjustable for brightness, with automatic shut-off to extend battery life, and an instant return to the last setting. Tube sights pass a 1-meter, 30-minute submersion test. Both types are rail-compatible; reflex models can be mounted directly to the slides of handguns like the Glock.

What can you expect to pay for a Styrka sight? No more than $820. Most models cost much less. The S7 series starts at $600. The illuminated 3-12×42 I just attached to a Krieger-barreled Weatherby lists for $720. Optically it performs above its pay grade. Sharp, bright, color-true images on flat fields show almost no color fringing. After moving the sight 80 clicks “shooting around the square” at 100 yards to confirm W/E values and repeatability, my last bullets landed within .6 inch of the first. This 21.4-ounce scope has a sleek profile, plenty of free tube for easy mounting in low rings on long and short receivers. 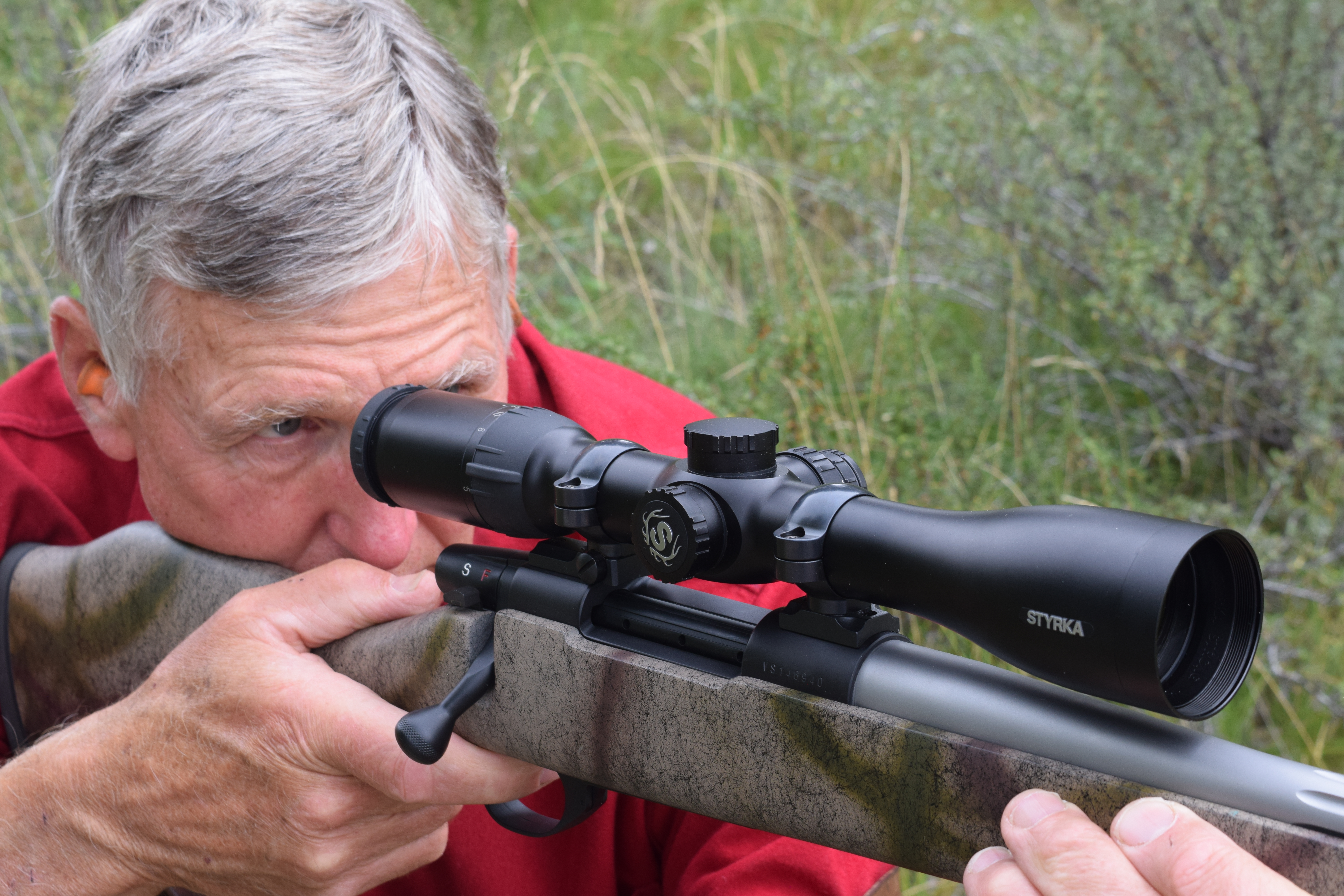 With 3.8 inches of eye relief, this Styrka affords quick aim from any shooting position. No brow cuts!

Yes, Styrka also lists binoculars and spotting scopes. They too are affordable. “Phase corrected,” “dielectric coated” and “BaK-4 prisms” are your clues that roof-prism S9, S7, S5 and S3 binos are good glasses. Beyond that, the terms mean nothing unless you’re an optical engineer or a journalist with more room to elaborate than I’ve been permitted here. All models are rubber-armored and tripod-adaptable, with twist-up eyecups for quick adjustments that stay put. The S9 in 8×42, 10×42 and 15×56 is of open-bridge design. It lets me wrap my big fingers around each barrel. Weights: 31 ounces for the 8x and 10x, a hefty 51 ounces for the 15×56. The S7, S5 and S3 – all 8x42s and 10x42s – have traditional bridges.

Styrka’s S7 8×30 has my eye. Compact and only 17 ounces, it’s the type of bino that suits my hunting style, probing salal thickets in the Pacific Northwest and crawling through Kalahari sand. Such use begs a warranty. Stryka’s is the best in the business and applies to all the company’s products: “In the event of damage or malfunction, we will repair or replace your Styrka optic free of charge. No questions asked, no registration require 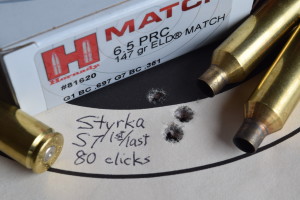 d…. It gets better. Send us your Styrka product and we’ll clean and tune it up once a year on our dime. Forever.” Yes, it applies to S7 15-45×65 and 20-60×80 spotting scopes too. Both have ED (extra-low dispersion) front glass and dual-focus (fine and coarse adjustment) dials. These scopes weigh 47 and 62 ounces.

Confession: I have no idea why anyone keen to be afield would complicate the day with a smart-phone. Still, many shooters carry one. For them, Styrka has its BDC and Ballistic Calculator. Designed for use with the BDC reticle in S7, S5 and S3 rifle-scopes, it’s a smart-phone app (Android or iOS) with ballistic data you can verify at the range and over-write with your own data if it differs.

For more on Styrka’s broad range of affordable but excellent optics, key up Styrkastrong.com.