The TenPoint Nitro X is the fastest, most compact crossbow ever made, capable of staggering 440 FPS speeds.

by the HuntDaily Staff; promoted by TenPoint Crossbow Technologies

You slip into the ground blind in the pre-dawn darkness. Inside, you cock your crossbow in total silence. There’s no clicking to potentially spook an unseen deer. Fully drawn, you load a custom-designed carbon arrow as moonlight glints off your broadhead.

A sliver of rising sun begins to bring the woodland world into focus. On a distant ridge, the sound of heavy hooves and winded grunts accelerates your heartbeat. Your grip tightens on the TenPoint Nitro X crossbow that rests, perfectly balanced, in your slightly trembling hands. It’s ready to send your arrow through the barrel chest of a giant whitetail at a blistering 440 feet per second, and with synchronized accuracy.

Suddenly he appears. The adjustable stock on the Nitro X locks into your shoulder as if it’s an extension of yourself, and the crosshairs settle behind the brute’s massive shoulder… 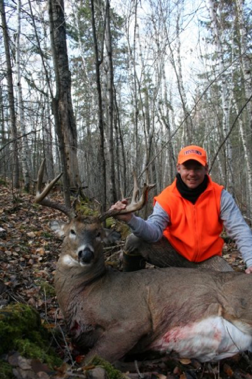 Instead of imagining what it’s like to have 440 feet per second in the palm of your hands, you can experience it for yourself with TenPoint’s new Nitro X – the most powerful and compact crossbow ever made. The Nitro X combines a unique reverse-draw design with revolutionary RX7™ cams and Vector Quad™ cable technology to create a power stroke that’s unmatched in the industry.

While other crossbows might achieve a power stroke of 12-14 inches, the Nitro X delivers a whopping 16.5-inch power stroke. Add the Nitro X’s patented SLING-SHOT™ technology (to be discussed in more detail), and that power stroke gets a “velocity kick” that vaults arrow speeds up to 440 FPS. All that speed results in a flatter trajectory, increased accuracy, and bone-busting kinetic energy up to 166 FP KE. Friends, that means that buck is in very big trouble.

All That Speed From a Compact Crossbow?

The Nitro X is the world’s most compact reverse-draw crossbow, measuring only 7 inches from axle-to-axle at full draw and spanning just 30.7 inches in total length. For hunters, that means supreme handling in tight spaces – whether hunting in a ground blind, from a tree stand, or in heavy cover during spot-and-stalk adventures. “It’s simply amazing that a crossbow with such scant dimensions can store and unleash so much devastating power,” reported hunter Greg Arens after shooting the first few arrows from his new Nitro X. 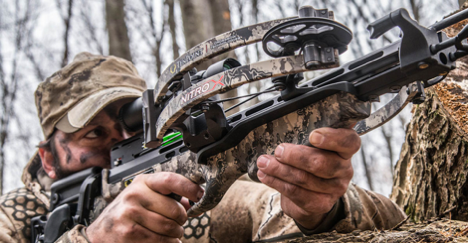 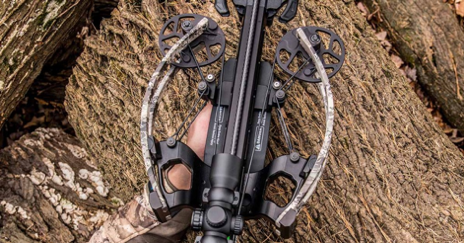 A big contributor to the Nitro X’s scorching speed is the ingenious RX7 cam. If a crossbow’s cams rotate in the neighborhood of 360° when fired, that’s an impressive number. Nitro X crushes that with a full 404° rotation, which helps make the 16.5-inch power stroke a reality.

Most compound crossbows rely on a traditional dual-cable system. TenPoint took this two steps forward with their revolutionary Vector Quad cable technology. It utilizes four independent cables for increased strength and stability. Vector Quad connects the cables at the cam, wraps them around the turnbuckle, and terminates them on the riser. It’s a finely-tuned system that balances torsion and tension to essentially eliminate cam lean – which translates into more repeatable accuracy, shot after perfect shot. 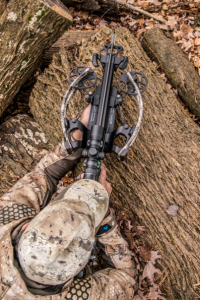 Say goodbye to the front heaviness that you experience with other crossbows, because the Nitro X and its reverse-draw geometry distributes the weight where it’s needed for impeccable balance. You’ll certainly feel the balance when you carry the crossbow. But where it really shines is when you shoot the Nitro X. It doesn’t pull your forehand down. Instead, it balances perfectly – just like a big-game rifle – resulting in more accurate off-hand shooting and reduced fatigue.

The biggest criticism hunters have about today’s “speed” crossbows is the noise they make. They’re just plain loud. Nitro X isn’t. In fact, it’s notably quieter than competitive crossbows, thanks to Vector Quad cable design and an integrated vibration dampening system that squelches string and limb oscillation in its tracks. Your ears will hear the difference, and your body will feel far less recoil as well. 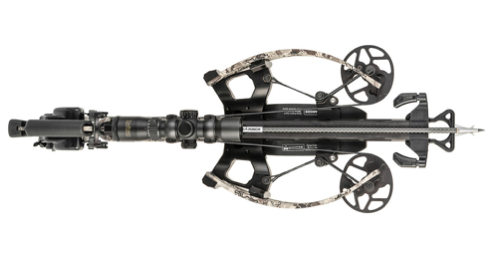 Another complaint you hear in crossbow circles is how noisy and difficult the cocking process can be with certain brands. Hunters asked for a better solution, so the team at TenPoint went back to the drawing board and invented ACUdraw Pro™ – the silent, safe, easy way to arm the Nitro X. The silence is a big deal if a follow-up shot is ever required on a hunt, and in states that don’t allow hunters to pre-load their crossbows before heading afield. ACUdraw Pro is also easy, with only 8-10 pounds of cocking force needed to arm the Nitro X. And, it ensures an identical, dead-straight string engagement every time – for accurate arrow deliver on every shot.

In shooting, one stock definitely does not fit all. And having an ideal fit is critical to proper shooting form and accuracy. That’s why TenPoint outfitted the Nitro X stock with adjustability – both for length-of-pull and cheek weld. 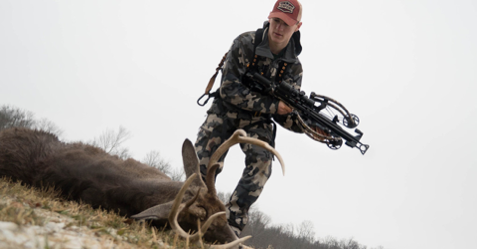 For a good shooter on a calm day, it would be nothing to break a dozen eggs with 12 arrows from the Nitro X at 100 yards. The precision engineering and 440 FPS speed make that possible. But TenPoint didn’t design the crossbow to attempt unethical long-range shots at big game. They created that accuracy and 166 FP KE pass-through power to put a broadhead on a spot the size of a dime for clean, quick big-game kills at responsible ranges.

Off-the-shelf arrows don’t have what it takes to bear the sheer power of the new Nitro X. So TenPoint worked with a leading carbon arrow manufacturer to develop specialized Evo-X CenterPunch™ arrows capable of handling 440 FPS speed. Every arrow is crafted to .001” straightness tolerances and fitted with CNC-machined, aircraft-aluminum OMNI™ Nocks that stand up to the Nitro X’s fierce power. A six-pack of Evo-X CenterPunch arrows, weight-matched to within 1 grain, comes with every crossbow sold.

In addition to all the exclusive features and benefits of the new Nitro X, every one sold to hunters and shooters worldwide includes: 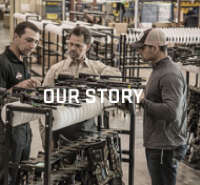 TenPoint Crossbow Technologies is 100% American-owned and manufactures all crossbows in the heartland of Mogadore, OH. Their Midwestern work ethic shines when it comes to customer service and technical support. When you give them a call, a real live and friendly person answers the phone to help you. Can you imagine? And here’s the best part: Let’s say you need service on your TenPoint crossbow and it’s the middle of the hunting season. They don’t want you to miss out on the action, so they turn repairs around in 5-7 days, shipping time included. Check out more about the new Nitro X and TenPoint’s full arsenal at www.tenpointcrossbows.com.