Frontloaders take the next leap in technology. Here’s the latest…

by the HuntDaily staff; promoted by Traditions Performance Firearms

Black nitride. Ferritic nitrocarburizing. Salt bath nitriding. Call it what you will, the fact is that nitride treatment has found its way into numerous firearm applications today—from handguns to austere-duty long-distance bolt rifles. And for good reason. Firearm barrels and components treated with a nitride process deliver exceptional surface hardness and chemical resistance. That’s a boost not only to durability and field performance, it also makes cleaning and routine maintenance a breeze.

Nitride technology has been increasingly popular among “black arms” manufacturers and enthusiasts as a no-nonsense alternative to the standard manganese phosphating process typically seen on AR platform rifles and “duty-level” military and LE bolt guns. Now, this same technology has entered the muzzleloader marketplace among select models in Traditions Firearm’s Vortek and Pursuit series of in-lines. 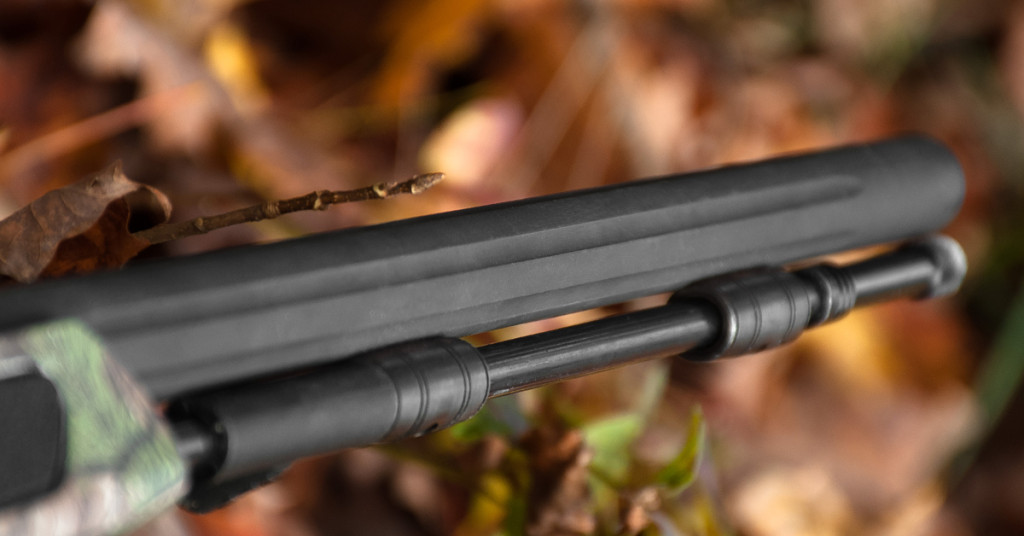 Let’s just say it’s an introduction long overdue and one we welcome enthusiastically.

In case this subject is new to you, nitride is applied as a hot liquid bath to steel or other ferrous materials. As with the traditional phosphating or Parkerizing process, this immersion application allows the solution to cover all surfaces, including barrel bores, threads, and acute angles that sometimes get missed when applying non-immersive coatings.

Nitriding is a transformative process like conventional bluing in that it chemically alters the surface of the applied metal. Nitriding, however, also increases hardness and boosts resistance to wear and harsh chemicals. In fact, nitride treatment substantially hardens the metal surface, which is why an increasing number of manufacturers who make rifle barrels and components for military and tactical duty are shifting from manganese phosphate to nitride. This contrasts with additive processes such as chrome lining. Additive treatments aren’t a problem on most exterior surfaces, but on close-tolerance internal surfaces such as a barrel bore, it does change the dimension.

Another advantage of a nitrided barrel’s exceptionally hard and smooth surface is its uniformity and resistance to fouling—highly desirable benefits for those shooting modern inline muzzleloaders with jacketed bullets and sabots.

Since a nitride treatment is like a shield against rust and corrosion prevention, it’s ideal for muzzleloaders that will see harsh duty for extended periods in the field—say on a backcountry elk hunt or a soggy whitetail weekend where time and conditions do not permit normal end-of-day cleaning routines.

This fall, we’ve been trying out the new Vortek StrikerFire® with a 28-inch barrel and nitride finish, and have come to appreciate the nitride treatment for muzzleloader applications. Muzzleloaders, as you know, can be a messy business not only cleaning them, but also keeping them free of fouling residue inside and out. The latter is essential to ensure rust and corrosion never gain a foothold.

And this is where the nitride finish shines. A couple swipes with a cleaning patch, followed by a dry and a lubed patch is sufficient between long strings on the range to keep the Vortek StrikerFire® running smooth. That’s because the rifle’s barrel is nitride treated on the inside as well as the outside. Our bench sessions hint that, unlike many rifles with “raw” bores, the nitride treatment seems to make the Vortek StrikerFire® easier to load with successive shots between cleanings, not harder. Furthermore, we never experienced fouling buildup, or crud, in the breech.

As for the exterior surface, the nitride treatment offers superior weather-resistance. Muzzleloader seasons across most of the country are open when the weather is usually the worst—cold with plenty of precipitation or ambient moisture—neither of which are particularly kind to muzzleloaders. That protection, alone, is worth the price of admission in our book.

Finally, the corrosion-resistant nature of a nitride finish is a big benefit when you are on an extended hunt, such as a backcountry spike camp hunt, where you may not be able to give your rifle a deep clean at the end of the day. Knowing that your muzzleloader can face inclement weather for several days without a thorough cleaning before crying, “Uncle!” allows you to focus on the hunt and not the drudgery of daily maintenance.

Of course, that is not to say you can toss cleaning and routine maintenance out the window. Even nitride-treated muzzleloaders like the Vortek StrikerFire® need TLC to ensure a long life and reliable performance. Traditions addresses this with several products designed to make cleaning easy, and we decided to use these products exclusively with our Vortek StrikerFire® to see how well this “total system” approach would work… 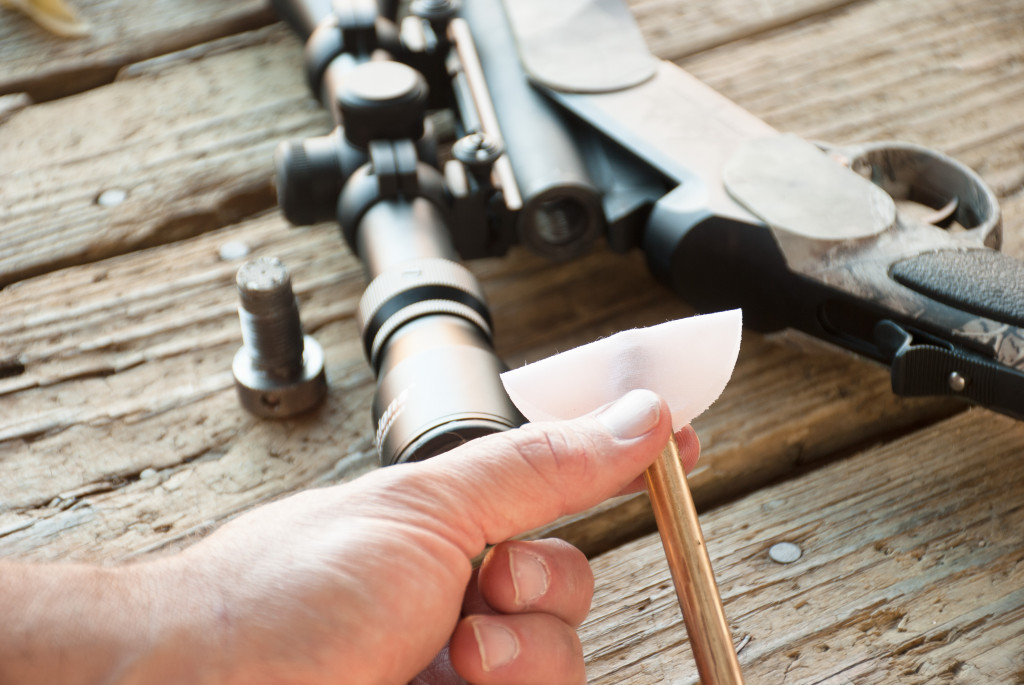 Traditions has a robust line of cleaning products for your muzzleloader, and we can’t sing enough praise about their pre-saturated EZ Clean2 cleaning patches. Just open the jar, affix a patch to the end of your jag, and run it down the bore from breech to muzzle. 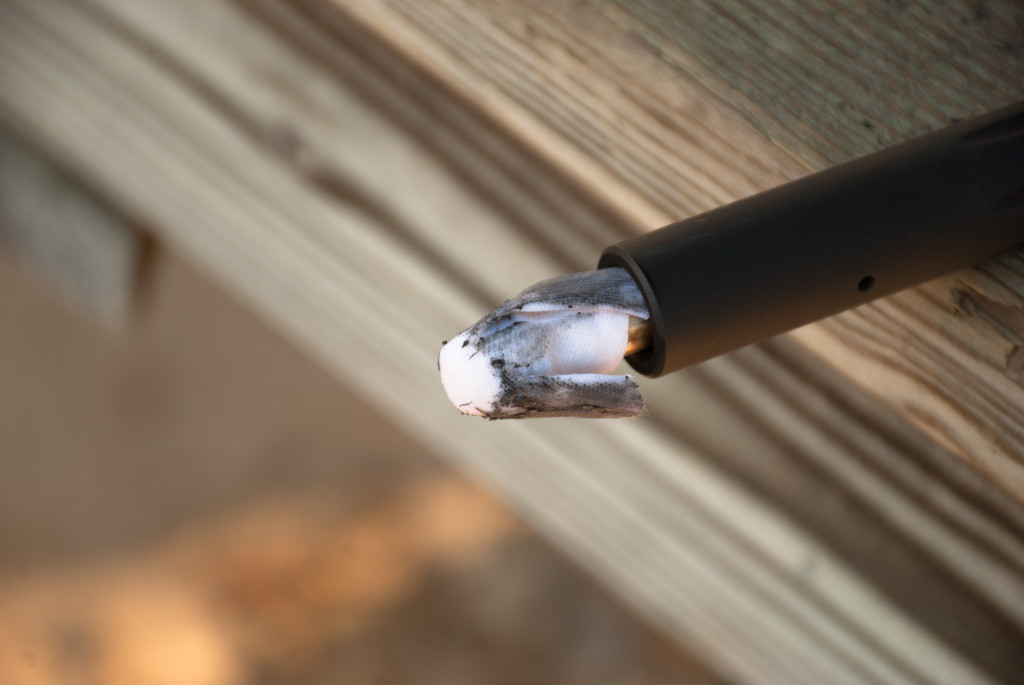 We like to run a couple of EZ Clean2 patches down the bore and then let it set for a few minutes to allow the solvent to loosen up the fouling deep in the land/groove corners. 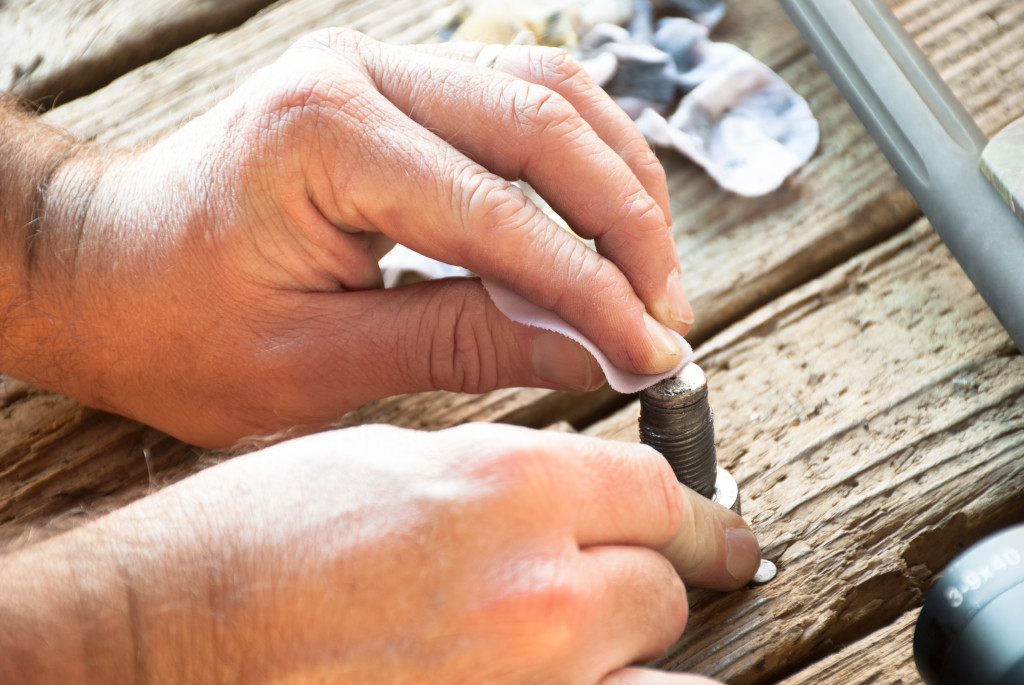 While the bore is soaking in solvent, this is a good time to clean the breech plug face. A lot of residue and fouling particulates get stuck on the breech plug face, but a single EZ Clean2 patch will wipe away most of it. When doing this, be careful not to wipe any crud into the fire hole. After cleaning, check the hole to make sure it is clear. If not, use a cleaning pick to clear it out. 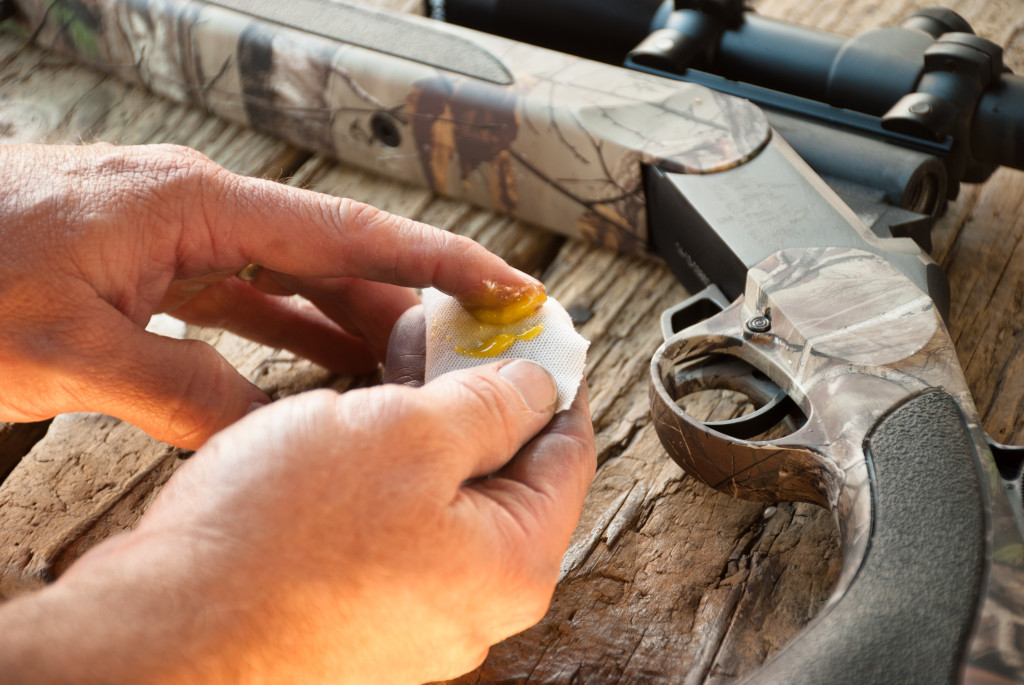 After leaving the solvent to work on the bore for a few minutes, run a couple of dry patches down the bore. They won’t come out lily white, but that’s OK in the field or on the range. This kind of intermission bore cleaning is only to get the bulk of the fouling out of your rifle. With the bore now dry, run a lightly lubricated patch down the bore (breech to muzzle) to prepare the bore for shooting (remember to reinstall your breech plug first). 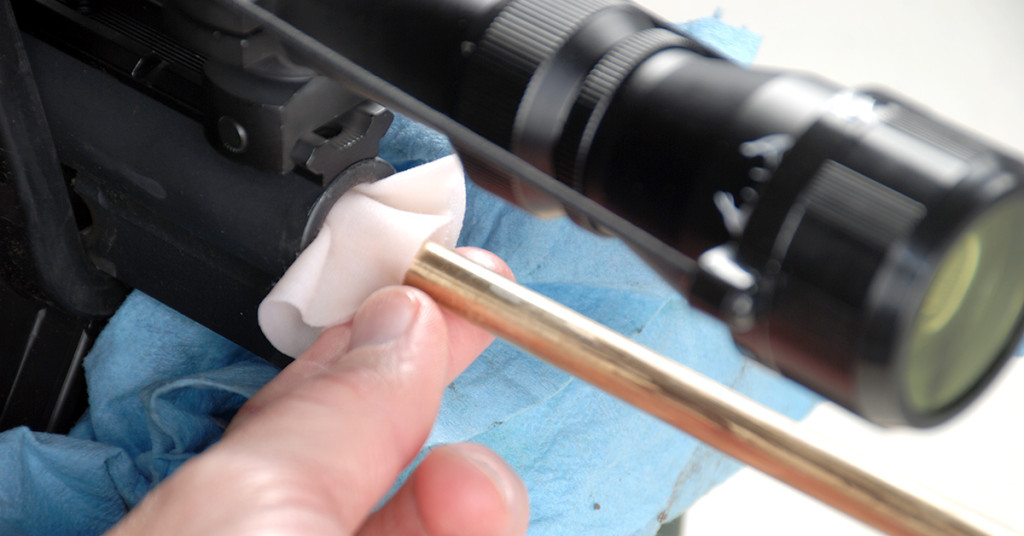 Following an extended session on the range or at the end of a hunting trip, your rifle needs to be treated to a deep cleaning. Unlike the field cleaning, the goal here is to remove all traces of propellant fouling, copper, and plastic residue (if you are using sabots) from the barrel bore, and to clean and relubricate all other components and friction points. Begin by placing the rifle on SAFE, ensuring there is no load in the barrel, and removing the breech plug. The Vortek StrikerFire® is easy to take down, so we advise removing the barrel from the stock and forend and placing it in a cradle when cleaning the bore. Again, thoroughly swab (breech to muzzle) with solvent, followed by a dry patch, and finishing with a lightly lubricated patch. 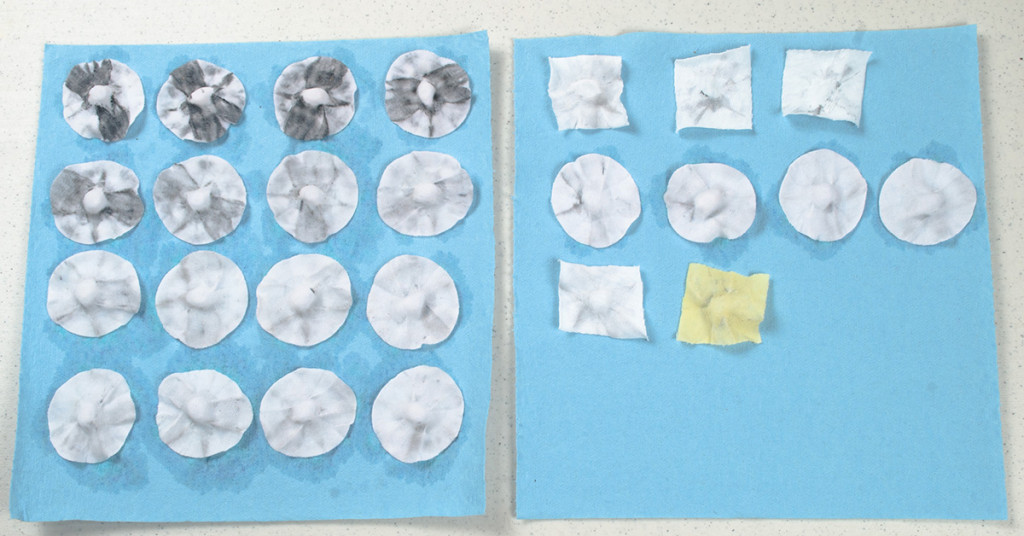 Here is the total progression of our barrel bore cleaning after several hours of shooting. Upper left is the first EZ Clean2 patch run through the barrel. Once the cleaning solvent patches show mostly clean, run two or three dry patches down the bore. If the patches are clean, run the lubricated patch to finish. If some residue still shows, swab the bore with a few more cleaning patches, then a dry patch. Repeat as necessary, and once clean, always finish with a lubed patch. 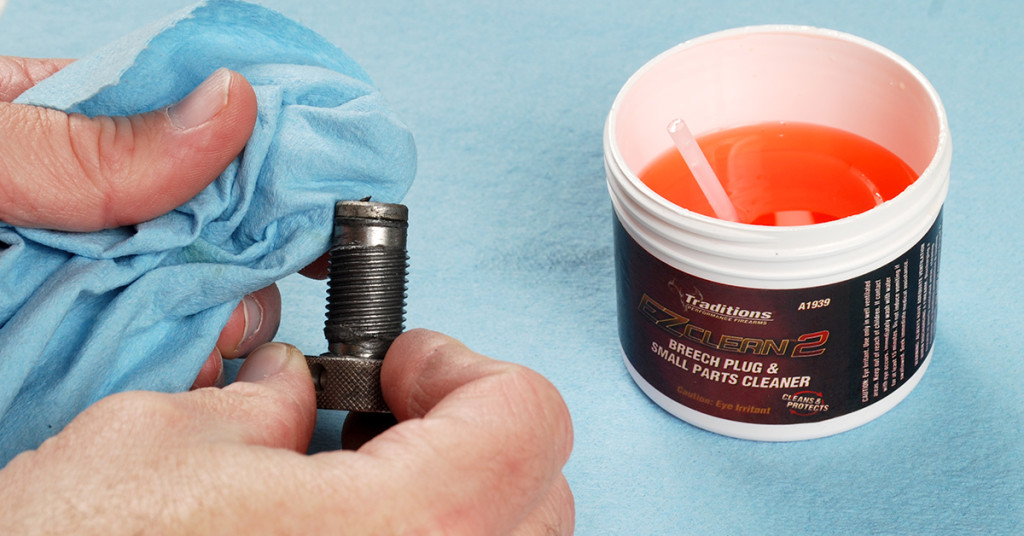 Thoroughly wipe down the breech plug to remove any large fouling deposits and thread grease. 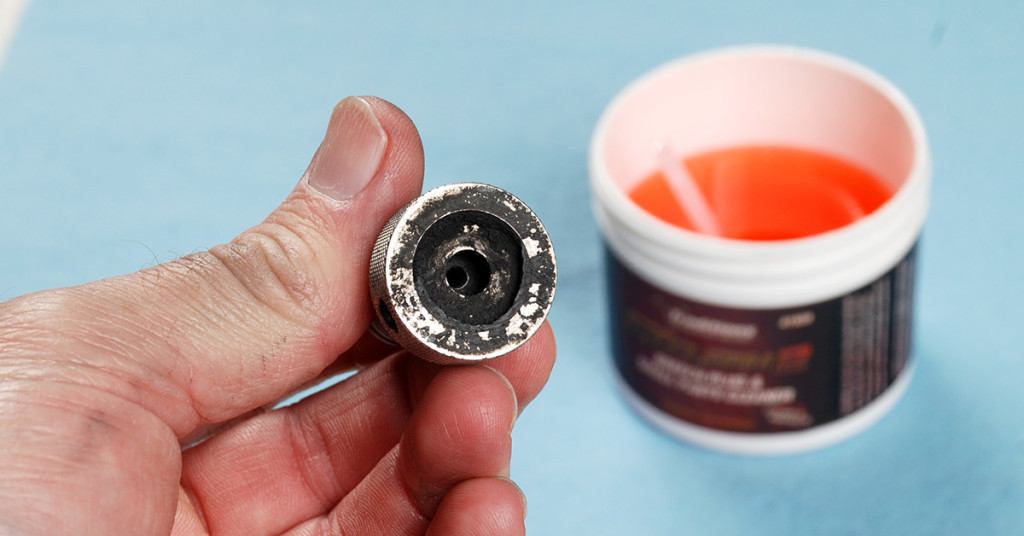 The back of the breech plug always sports some stubborn residue. Wipe it down to remove the major fouling. 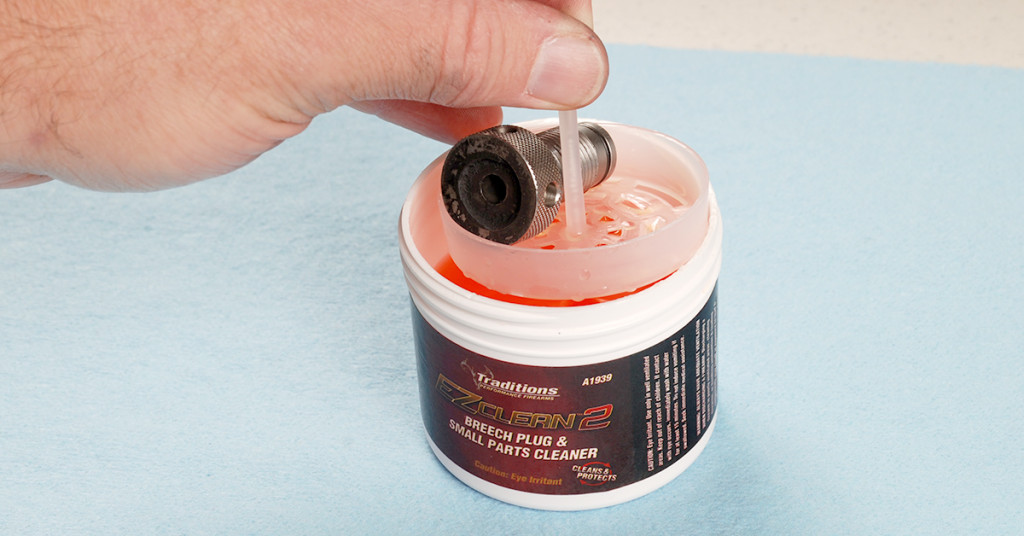 The Traditions EZ Clean2 Breech Plug and Small Parts Cleaner has a basket that is perfect for suspending components with hard-to-reach nooks and crannies. Drop the breech plug into the basket, secure the lid, and then shake the solvent container for about 30 seconds. 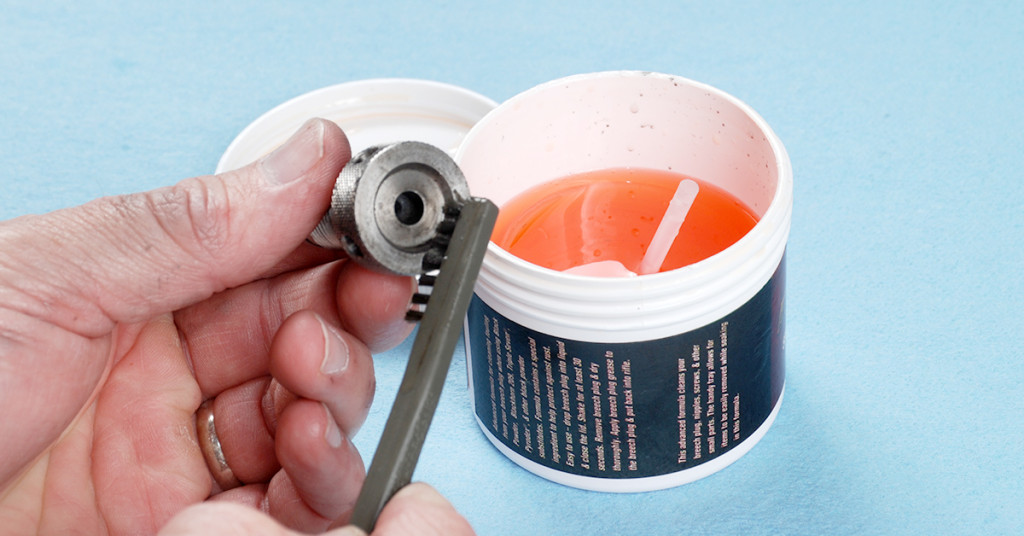 Once the soaking is complete, remove the breech plug and use small detailing brush to scrub off any remaining fouling. 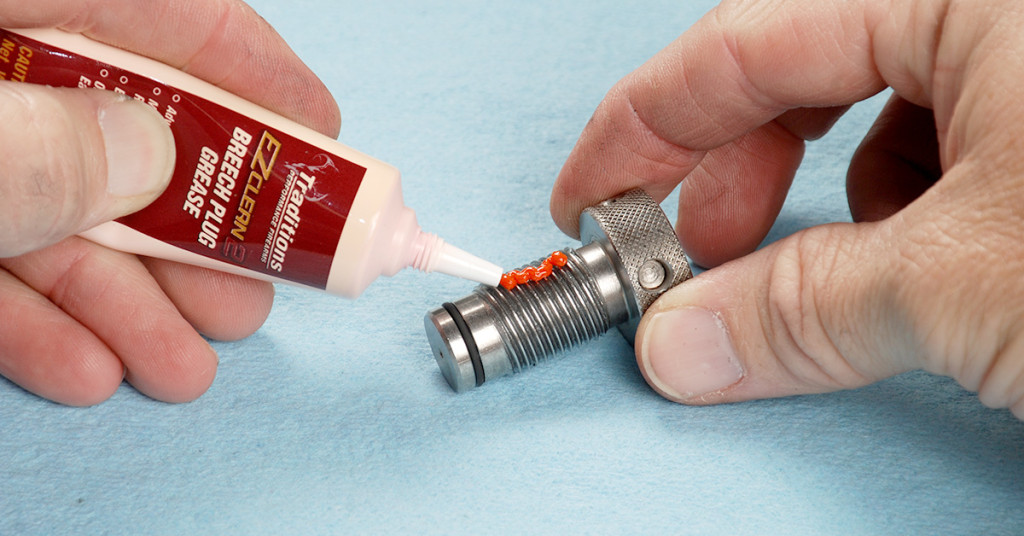 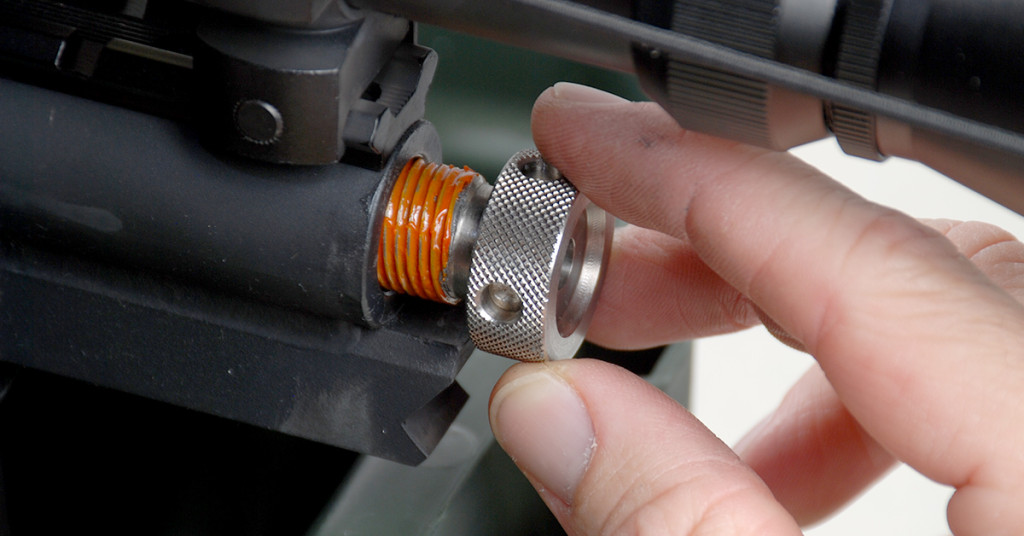 Insert the breech plug into the barrel and tighten. One of the things we like about the Traditions™ Accelerator Breech Plug™ is that it screws on and off with three rotations and does not require tools. Fast and easy for the field or the bench. 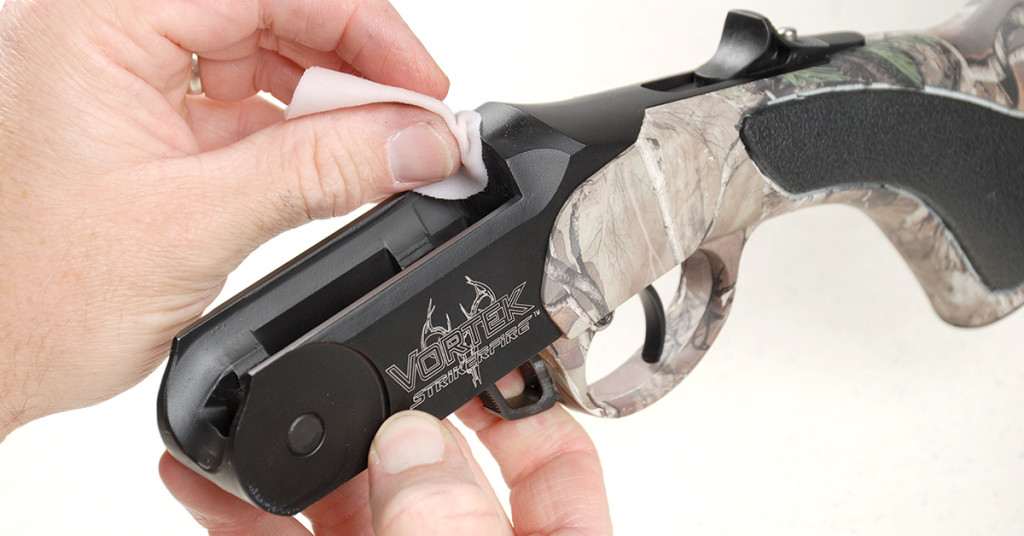 Complete the cleaning process by wiping out all residue from the receiver area. A thorough cleaning will also involve removing the trigger and safety components. Refer to your firearm-specific owner’s manual for instructions on how to do this.

As modern in-line muzzleloaders go, the new Vortek StrikerFire® in nitride finish and Realtree Xtra is hard to match for an all-weather, do-everything rifle. Our package (R5-569246) also included a pre-mounted 3-9×40 scope, which is all we need in a .50-caliber big-game rifle. 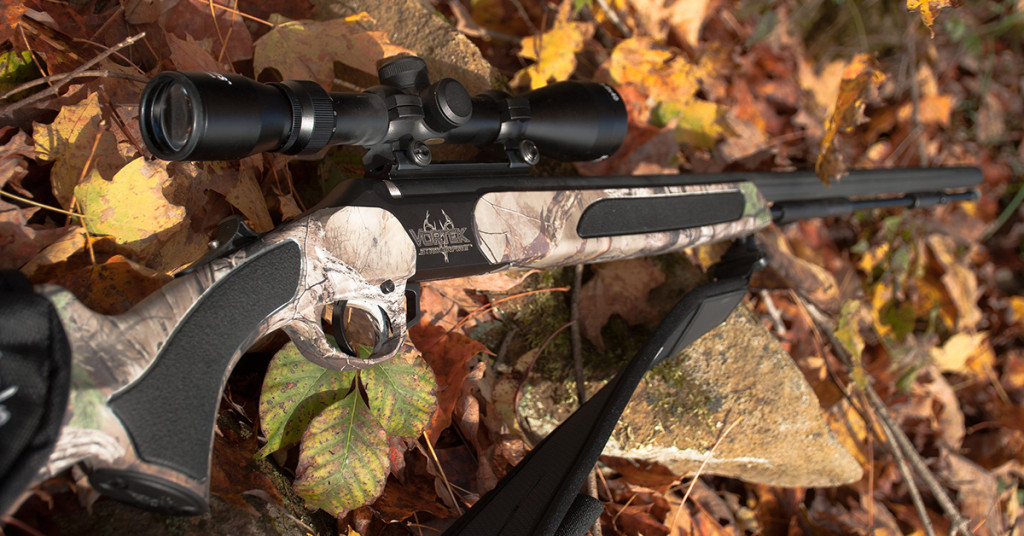 The StrikerFire name comes from the rifle’s trigger/safety system. This rifle does not have an external hammer. To cock the trigger, simply slide the striker button forward until it locks. Uncock the rifle by depressing the decocking button and allowing the striker button to slide back to the uncocked position. A conventional safety bar located above the trigger guard allows you to move from safe to fire. Another integrated safety feature is that the system automatically de-cocks when you break open the action.

Ergonomically, this rifle sits on the top shelf. We especially like the no-slip Hogue overmold panels on the forend grip, which allow you to keep a solid grip on the rifle when wearing gloves. That’s ideal for deer hunters, since muzzleloader season usually means cold-weather apparel season.

Drilled and tapped for a scope 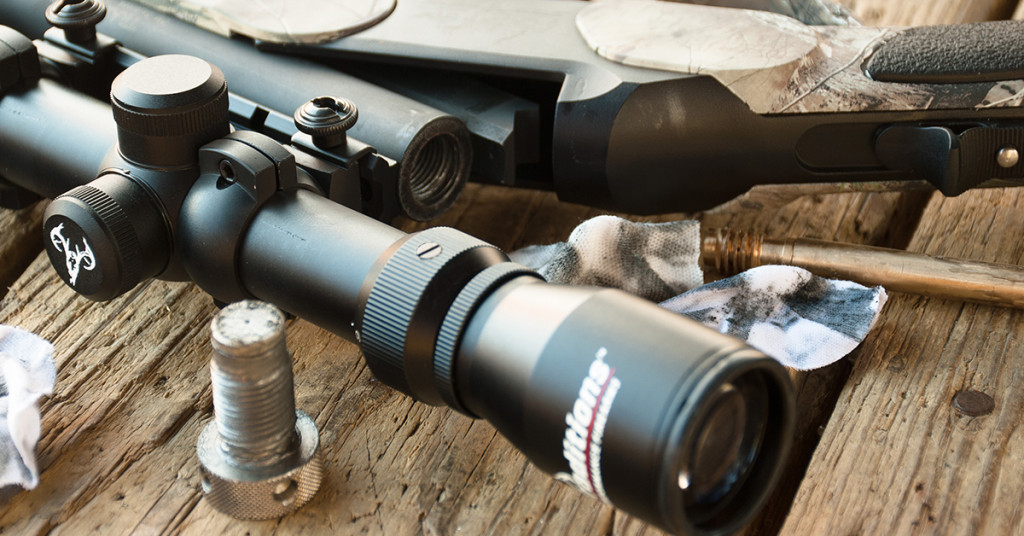