Out of the box and straight to the field, this all-new rimfire surprised us with its accuracy and value.

article by the HuntDaily staff

Competition is a wonderful thing. While businesses get heartburn trying to deliver more and better for less and less, we consumers say, “Take an antacid and get on with it!”

When the smoking hot .17HMR came out several years ago, rifle manufacturers looking to deliver this chamber in a semi-auto platform had so much heartburn that many stepped away from the table altogether. The engineers at Savage Arms, however, took the antacid and developed a solution. The result was the groundbreaking A17 semi-auto rifle—an all-new platform that not only solved the blowback bolt engineering challenges of high-pressure rimfire cartridges, but also incorporated several accuracy enhancing technologies already in place across Savage’s centerfire rifle models, such as a precision action, high-quality barrel, and the industry heralded AccuTrigger system.

The A22 Magnum followed the A17 early in 2016, but that left an uncomfortably large hole in this fledgling, contemporary styled rimfire series. A few months ago, Savage filled that hole with the release of the A22 LR.

If you’re a rimfire fan, you’ll find a lot to cheer about with Savage Arms’ newest product.

The semi-auto .22LR marketplace, of course, isn’t exactly unplowed turf. Off-the-shelf high-performance .22LR rifles of that particular flavor, though, are not so common. That world has, in fact, been dominated by one manufacturer for many years.

We were able to get an A22 LR special-ordered through our local dealer just as Savage was making their initial deliveries. The rifle came with a sleek, black poly stock, black matte finish, two 10-round internal rotary magazines, adjustable open sights, and a pre-mounted Weaver-style top mount base pair. 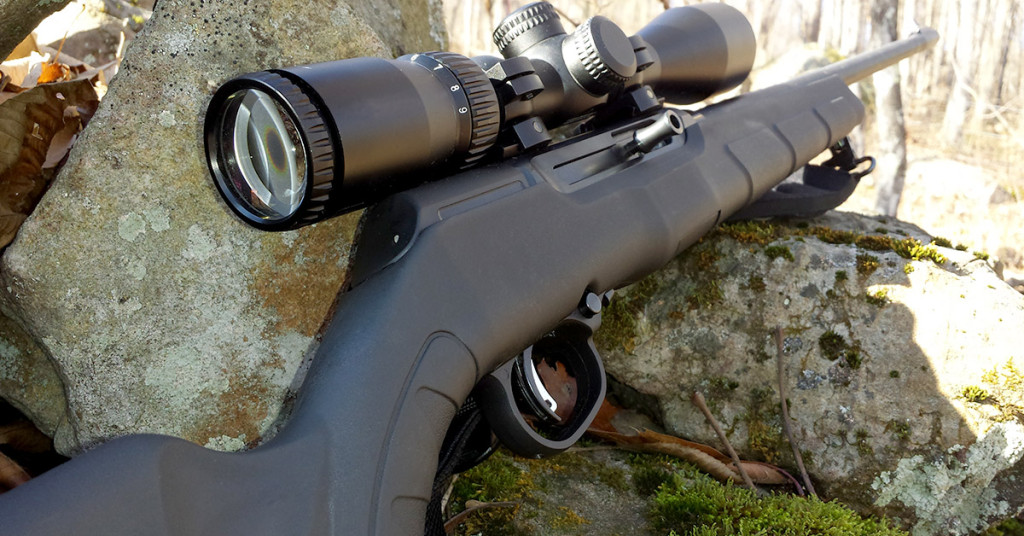 Throwing the rifle to your shoulder, the A22 has a light, comfortable feel, with a length-of-pull and comb drop height that fits perfectly to our mid-size frame. The synthetic stock feels somewhat slick if your hands are especially dry or you are wearing gloves, but the molded “pads” along the fore end counter that to provide a positive grip. 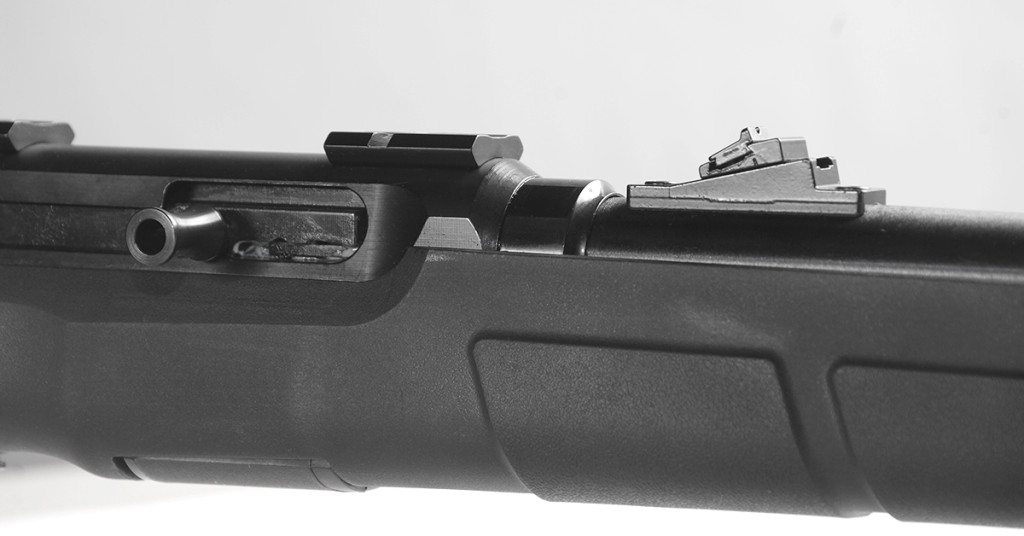 Open-sight aficionados will appreciate the fine-tuning capabilities of the A22’s rear sight. This is a three-piece unit with infinitely adjustable windage and elevation. The calling card of the A22, however, is its downrange accuracy, so to exploit the rifle’s full capabilities (and because our eyes no longer appreciate the joy of shooting with open sights), we removed the rear sight to make room for a 3-9X scope. Also, our goal with this rifle was to develop a small-game hunter, so to crack a squirrel’s noggin at 50 yards, only a scope would do.

As veteran shooters know, there are many paths that lead to accuracy (defined as consistent point-of-impact). Since only a relatively small number of the shooting and hunting enthusiast world actually follows those paths, we often take the measure of a gun by how well it will perform under the typical “real world” shooter conditions—out of the box and to the range with no break-in and shooting off-the-shelf ammo. 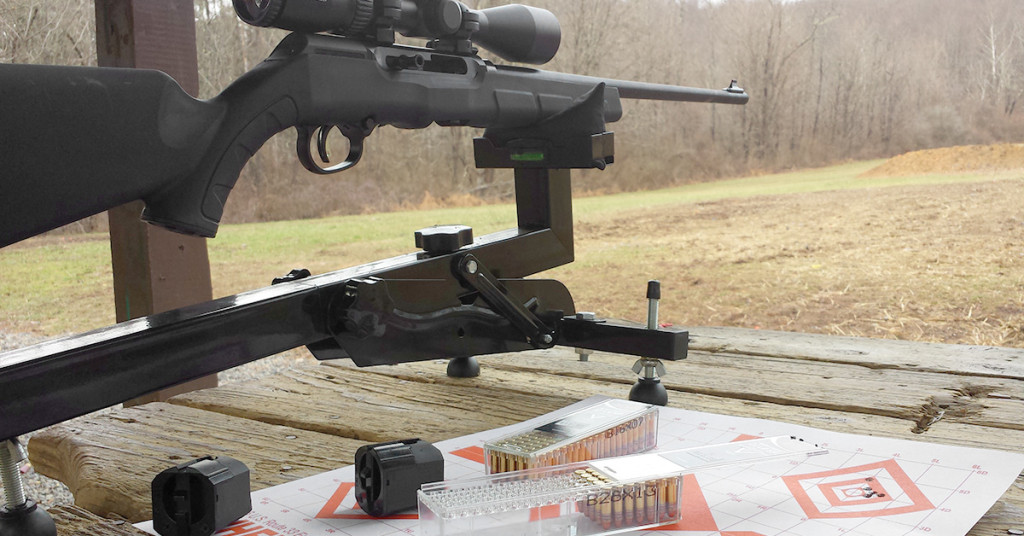 For those who have not shot Savage’s AccuTrigger before, you’ll like it. We left it at the factory setting, which was a tad heavy for our tastes, but it can be adjusted by the shooter for optimal pull. Travel length is short and the sear break is crisp and light, allowing minimal shot disturbance during the firing sequence. 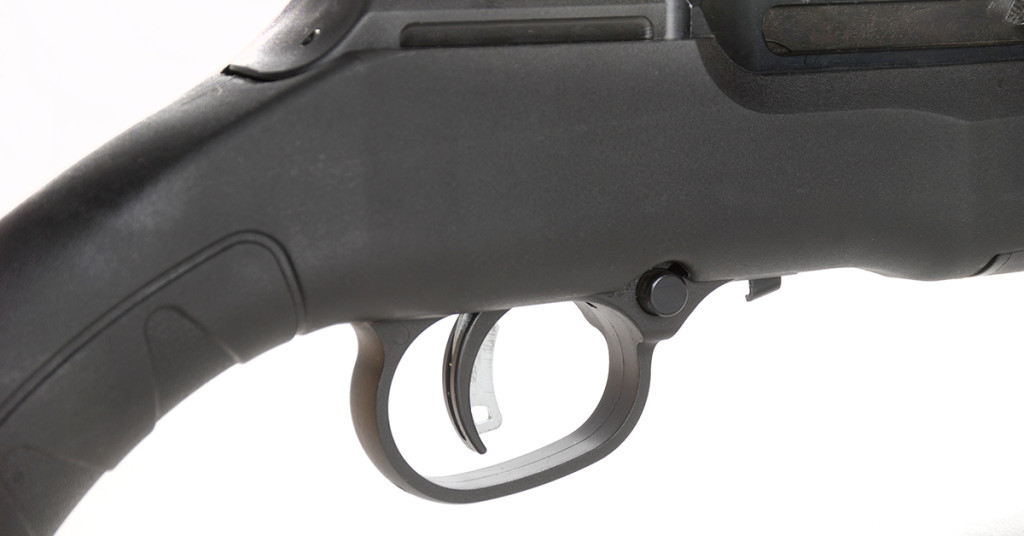 Without cleaning the barrel after those initial rounds fired, we moved the target out to 50 yards for the final dial-in and expended another 50 rounds getting familiar with the rifle and the trigger pull. The A22 performed flawlessly, with no failure to feed, failure to eject, or failure to fire malfunctions despite shooting it straight out of the box with only the original factory lube.

Satisfied with our sight-in, we burned the last 25 rounds in five-round strings for our “best of” finale. The temperature was a brisk 34 degrees, with crosswinds of 5-10 mph. At 50 yards, our average grouping was just under 3/4 inches. 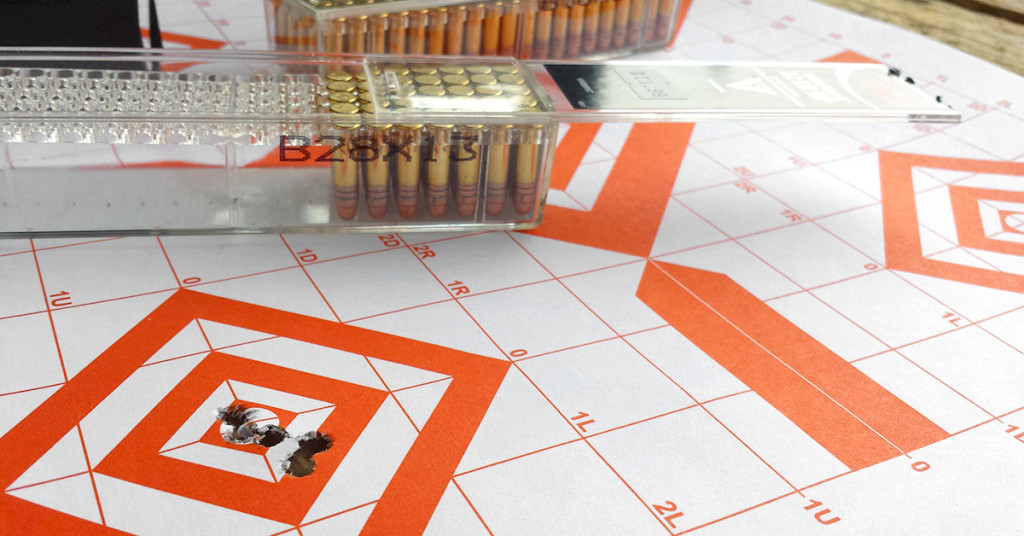 We’ll give a quarter-inch to our poor bench shooting skills and watery eyes due to the cold breeze. Even so, that’s top-shelf performance for a bone-stock, unseasoned rifle and off-the shelf ammo that any small-game hunter or target plinkster would envy. That the package comes with a $281 MSRP makes it an even better value.

As mentioned earlier, our goal with the A22 was to take advantage of its Savage-accurate DNA and develop a “long range” squirrel gun. To that end, we spent several afternoons trying our best to bag some bushytails, plowing through thickets and climbing hillsides while wearing everything from light weather clothes to bulky winter dress (that’s December in the Appalachian Mountains for you). Trying as it was, our time spent in the bush gave us a good feel for the A22’s hunting credentials.

The polymer stock, for example, really gives the A22 a light and maneuverable feel, making it easy to transition between shoulder carry and port arms carry when needling your way through brush. And although this stock, like all uncoated polymer stocks, can be noisy when it rubs against a branch or a buckle, it’s built to take abuse. 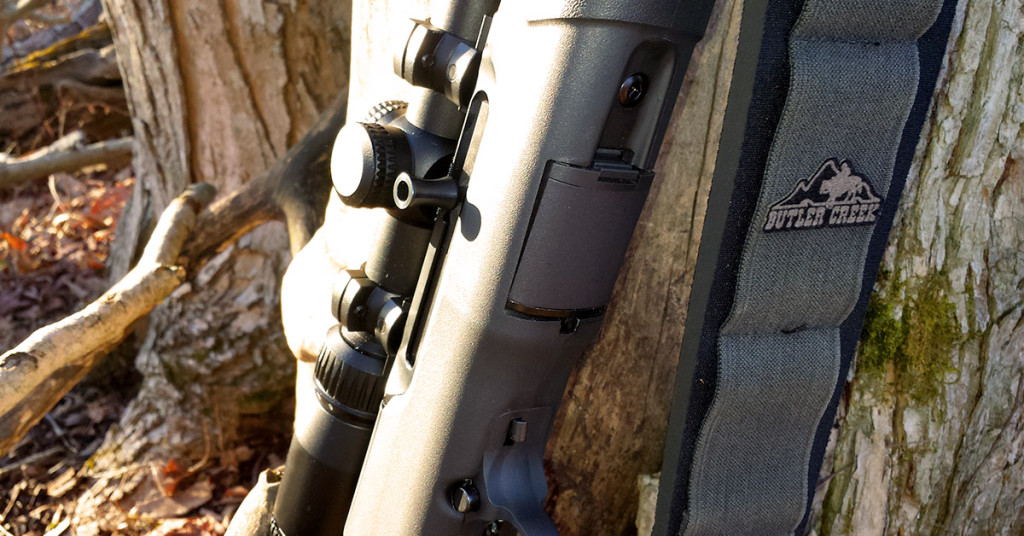 If there is one gig we would give the A22, it would be the magazine. We do like the 10-round rotary mag because it is compact, fits flush with the stock when installed, and is easy to load. The problem we had was that it came unlocked a few times when we unslung it from our shoulder. You must make sure it is securely locked in place and be aware that catching the retaining tab on your clothing or accidently hitting it could cause the mag to fall out. 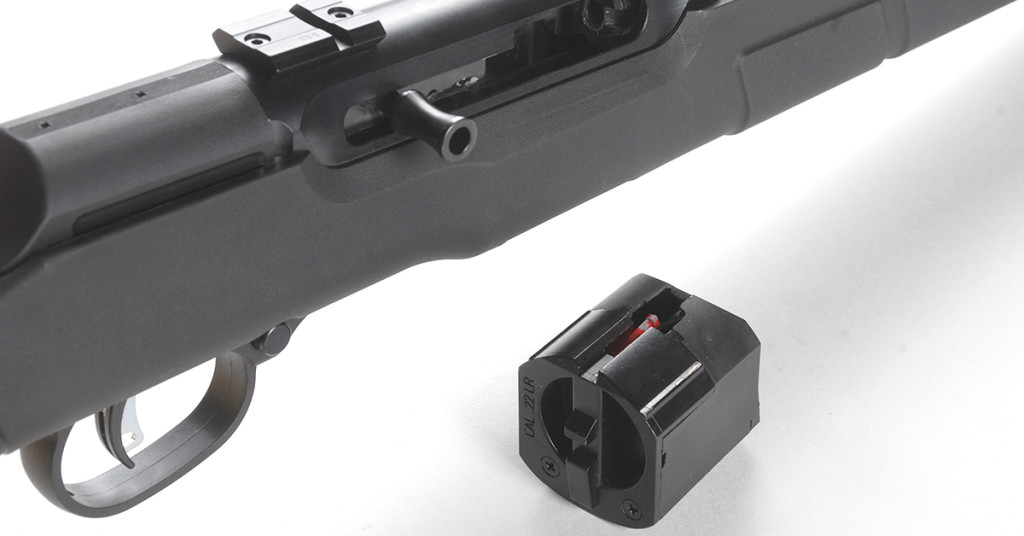 Now, we’d like to tell you that our several outings produced a brace of squirrels for the pot, and that the A22 crackshotted them all at 30+ yards. Unfortunately, the foul weather had the little buggers hunkered down in their leafy nests for the duration. No shots fired. On the plus side, we got a lot of exercise taking the A22 for long walks.

For box-to-bench performance, the Savage Arms A22 LR earns a solid A in our book. This level of factory performance is simply uncommon for a rimfire semi-auto priced below $300. That it comes optic-ready is another a bonus.

Now, if we could just find some squirrels that aren’t denned up…