I had almost resigned myself to the cold fact that the goats were going to win. In the last two days I had put in several miles of stalking the subtly rolling prairie country of southern Colorado in pursuit of pronghorns. Shots were presented, shots were taken, and shots were muffed. Now there were ten minutes left of legal shooting light and the possibility of me going home with an unfilled tag loomed large.

Three of us had come to southern Colorado to hunt speed goats with Fred and Michele Eichler, owners of Full Draw Outfitters and hosts of Easton Bowhunting TV and Predator Nation. Fred and Michele’s territory is the Shangri-La of big-game hunting, holding enviable populations of elk, whitetail and mule deer, pronghorns, bears, lions, turkeys, and waterfowl. Our plan was to forego the usual centerfire rifle or archery hunt and try our hand at dropping goats with our Traditions muzzleloaders. We not only wanted to “up” the challenge, but also wanted to prove that the muzzleloader could be just as effective on open-range, fast-moving game like pronghorn as it is on whitetails, elk, and everything in-between.

Hunting partner Kali Parmley was the first to certify our mission when she dropped a beautiful buck the first morning of our hunt. Kali used a .50 caliber Vortek StrikerFire and, shooting off of sticks, made an impressive 200-plus yard shot just before the buck was about to jump a fence and disappear into the thick cholla.

Hunting pronghorn in arid prairie country is a lot like I imagined it would be, and nothing like I had anticipated. Unless you’re hunting over a water hole, where 30-yard shots from an enclosed blind are the norm, spot-and-stalk is the name of the game. Since we didn’t fancy the idea of sitting in a sweltering blind for hours on end, waiting for the pronghorns to show up, we spent our time driving the expansive pasture lands looking for herds of goats. The technique involved driving up to a high point (a relative term in prairie country), and then glassing the countryside for the tell-tale signs of brown and white mixed in with the dark scrub and cholla—a low-growing cactus common in this area.

That’s the part of pronghorn hunting I knew about. What I didn’t realize was just how unpredictable and fast-moving these critters can be.

I spent the first day with Michele Eichler serving as my guide. Michele has hunted this territory for years, and knows the general patterns of the resident pronghorns. I say “general” because, except for the established ponds and water troughs the animals frequent regularly, patterning pronghorns is about as accurate as predicting where a bag of marbles will scatter if you drop them on the floor. Several times throughout the day we spotted bucks with their harems, then parked the truck and set off to intercept them, using the sporadic brush and uneven terrain to provide cover. After setting up in a position to intercept, we often waited…and waited, only to learn that the animals had veered sharply from the predicted path.

Where the goats go and why is a question only the goats can answer.

To Michele’s credit, we did make one successful intercept on the same herd we tried to get on earlier in the morning. The problem was that the pronghorns drifted a bit too far out of my cone of confidence.

The evening before, my companions and I spent some time ensuring that our muzzleloaders’ zero had survived the trip to Colorado. Shooting on the bench, we verified our rifles’ lethality out to 300 yards. The problem is, I’m quite the Shaky Sam when shooting beyond 200 yards. The mass of the muzzleloader helps with my stability, but still… When Michele ranged the buck at 324 yards, I knew it would be a shot that would stretch my limits while shooting prone over my daypack. Determined, I set up and put the crosshairs right on top of the buck’s back, settled my breathing, and pulled the trigger. Dust erupted and off they went.

Day two offered new promise. We had seen a lot of pronghorns the day before, made several stalks, and I had gotten the “first shot” out of my system. This day I teamed up with guide Ryan, and our morning proved quite eventful. We spotted a small herd with two bucks in the mix, and spent the next few hours on foot, sometimes crouch-walking, sometimes running, sometimes crawling on our hands and knees, trying to get within range. We trailed behind the goats as they made their way through the scrub and to a water trough. The plan was working, but with only a couple hundred yards to go before show time, the two rival bucks began to agitate each other and the herd moved off. 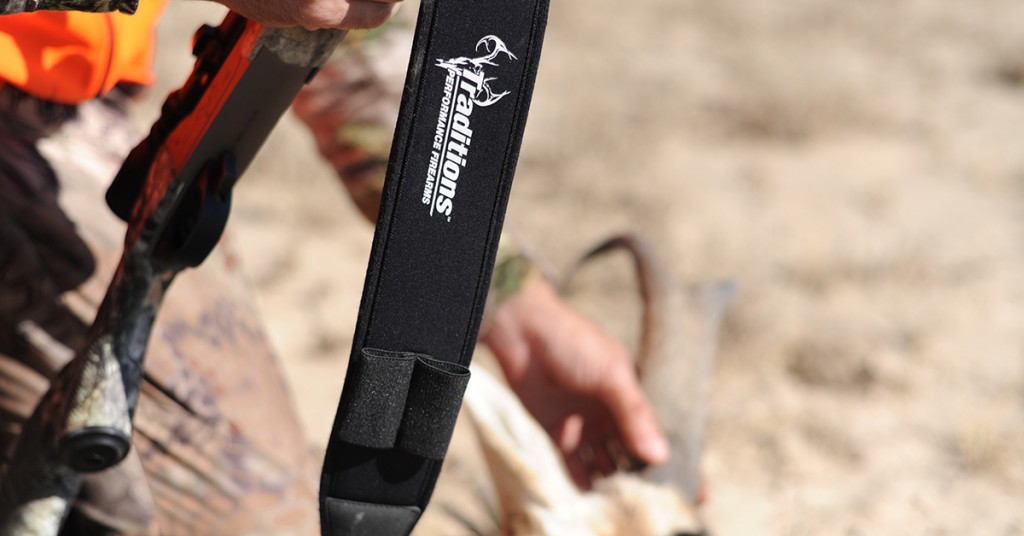 This story repeated a couple more times throughout the day. Then, as the sun was setting and we were winding our way back to camp, we spotted a buck and two does near a water hole. Our chances of slipping up close were sketchy, but we had nothing to lose since the light was quickly fading. After a short hike, I set up on Ryan’s bipod. He called out the range at 240 yards. I had no doubts that my Traditions StrikerFire was up to the task. The question was, could I keep the rifle still enough? I prefer to shoot prone at these distances, but the line of thick cholla between me and the buck would not permit it. Steadying my breathing, I pushed forward on the striker button to cock the rifle, placed my reticle along the buck’s back to account for that extra 40 yard drop and squeezed the trigger. The reward came when that familiar SMACK sounded across the prairie.

I had taken my first antelope, and I did it with a muzzleloader.

If you can get a tag for good pronghorn country, goat hunting offers non-stop excitement. You may have to work hard for the shooting opportunities, but that is the point—YOU ARE HUNTING most of the time. You spot, you stalk, you shoot or they bust you, you find some more goats, and you do it all again. This is especially true if you pick up the challenge of hunting antelope with a muzzleloader. In a prime area, you can often score quickly when using high-powered centerfire rifles and long-range optics. But then your hunt is over. To fully experience the excitement and the challenge of hunting pronghorns, nothing beats doing it with a muzzleloader!