Packed with premium features, hunter-focused engineering, and the smoothest trigger and safety system on the market today, this front-stuffer is surprisingly affordable

We love deer hunting with muzzleloaders. It’s not just the “one-shot” challenge that we like, but the extra time we get to spend in the woods after the craziness of centerfire rifle season is over. The woods have calmed down, it’s much colder, and the overall late-season muzzleloader hunting experience takes on an air of new adventure and excitement that we look forward to each year.

Yet as much as we appreciate hunting with the frontloader, the firearm and the season bring with them some extra challenges and aggravations. For example, it’s a bit of a hassle to fumble with hammers, safeties, primers, and breech breaks when your fingers are icy cold or you’re wearing thick gloves. Then there’s the cleanup and constant attention to cleanliness when dealing with the sometimes messy and always corrosive muzzleloader propellants.

We take the good with the bad, but the former certainly outweighs the latter. 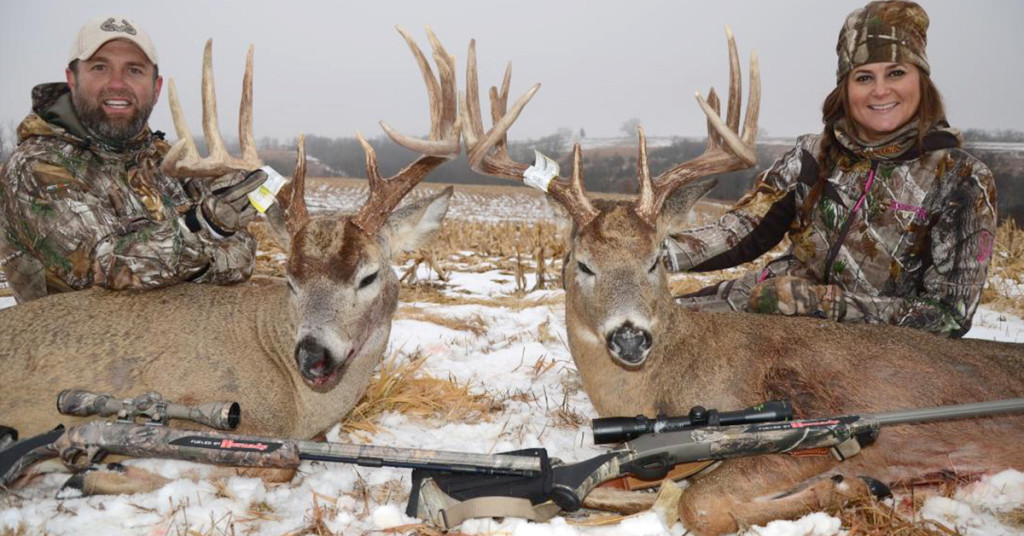 One muzzleloader, however, has certainly changed the game for us in terms of ease-of-use, reliable performance, features, and the overall quality-to-performance ratio. It’s the Vortek StrikerFire by Traditions Firearms. If you’re looking for the most feature-rich, premium quality muzzleloader you can buy and still leave money in your pocket, this is one rifle that needs your closer examination. We’ve used the Vortek StrikerFire on the southern Colorado plains in pursuit of antelope (dropping a nice buck at over 200 yards) and in the eastern whitetail woods, and it certainly gets our approval on many levels.

The hallmark feature of the Vortek StrikerFire is its namesake firing system. The StrikerFire is a hammerless system that utilizes an internal, spring-powered striker to strike the primer and start the ignition process. There are several advantages to this system that are especially welcome in a muzzleloader platform.

First, a striker-fire system such as this one means there is no hammer to cock prior to the shot. That’s great news during the often-frigid muzzleloader season because hammer-cocking can be a thumb-fumbling exercise when you’re wearing heavy gloves.

Second, not having to reach up and pull a hammer allows for greater mounting and adjustment options for your scope. The scope can be mounted lower toward the bore axis or adjusted closer to the shooter for optimal eye relief without the usual hammer-thumb-ocular lens interference (again, something that is traditionally a big problem when wearing heavy gloves). 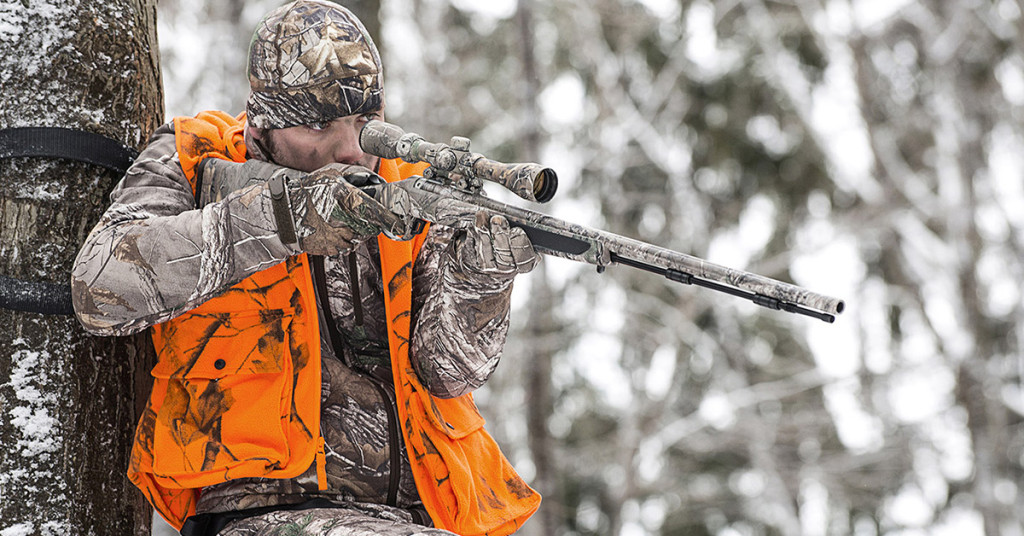 In place of the conventional hammer, the Vortek StrikerFire uses a sliding “striker button” located atop the stock wrist to cock the internal striker assembly. Simply push forward on the striker button until it locks in place and the rifle is ready to fire. If you happen to not take the shot, decocking the striker is equally simple. Push down on the striker button and the button will slide back to its uncocked position. You finger never has to move into the trigger guard and you don’t have to manipulate both a hammer and trigger to decock (unlike conventional hammer/trigger designs). Again, for use when wearing gloves, the StrikerFire system can’t be beat.

Working in concert with the StrikerFire is the included TAC2 trigger system.

Most hunters don’t think of muzzleloaders as a platform that could benefit from a refined, competition-level trigger, but the folks at Traditions do, and rightly so. With its precision chromoly tapered and fluted barrel sitting beneath a top-end optic, the Vortek has an accuracy potential exceeding the skill level of most shooters (including us!).

That long-range potential is further aided by the TAC2 trigger. This is a two-stage competition-style trigger, featuring a 2-lb pull and a crisp sear break. Match that with the shortened locktime of the striker-fire system and the Vortek StrikerFire eliminates two common inaccuracy variables: poor trigger pull and extended dwell time between the sear break and firing pin contact with the primer (locktime).

It’s no wonder that this muzzleloader rewrites the rules for long-range hunting accuracy. 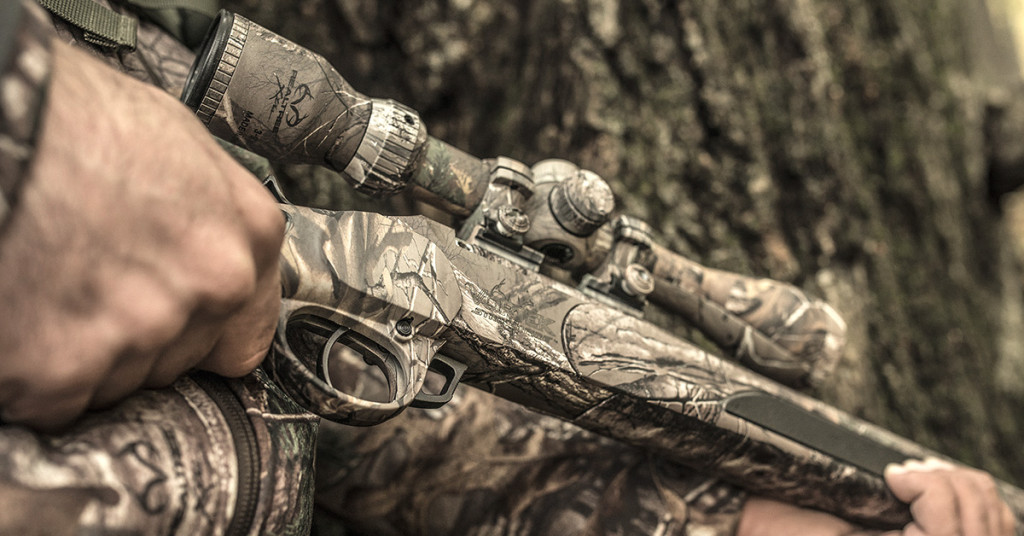 As an added safety measure, the Vortek StrikerFire has a conventional trigger block safety located at the top of the trigger guard. Expose black for safe, red for fire. We haven’t had the need to use it since we don’t cock the StrikerFire until we’re ready to shoot, but it’s there if you want it.

Speaking of redundant safety, there is a large barrel catch lever located in front of the trigger guard. Depressing this lever releases the barrel to pivot on its action pin and expose the breech. If you happen to pull the barrel catch lever while the rifle is cocked, the StrikerFire system will automatically decock.

Practically as easy as breaking the action is removing the breech plug. Traditions calls this the Accelerator Breech Plug because you can remove it and insert it by hand in about three rotations. This is a virtually fool-proof system for accessing the rifle’s breech for cleaning or charge removal because you can screw the plug in or out by hand and the rifle cannot be cocked unless the plug is completely seated (another safety feature to prevent dangerous blow-back). Something else we really like about the Accelerator Breech Plug is that you can quickly insert a 209 shotgun primer directly into the firing hole without a primer tool, and there it will stay until you pluck it out. 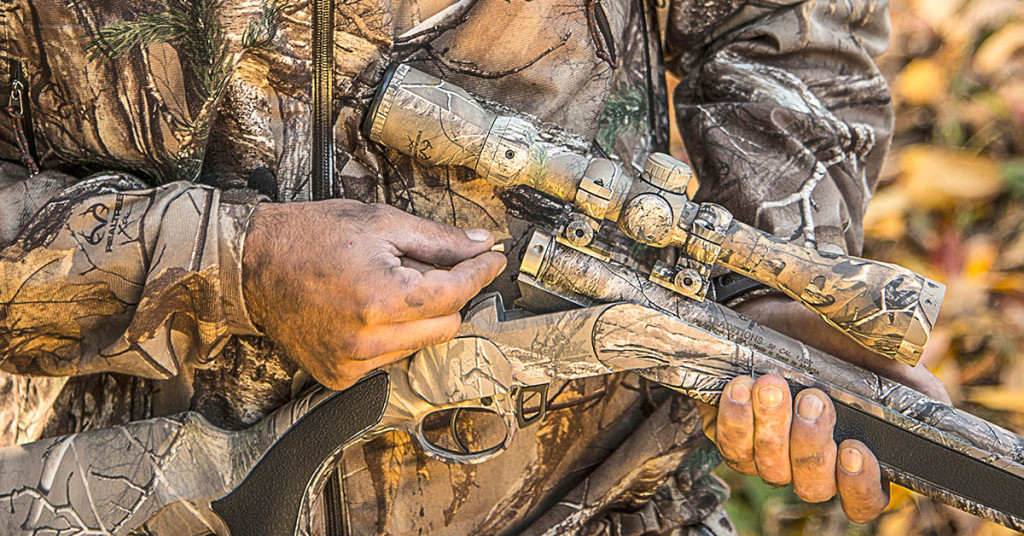 The Vortek StrikerFire comes in several model variations to suit your tastes and your budget, as well as models specifically configured to satisfy regulations in the Northwest states. Some models even come with full camo and a variable-power scope. All, though, include a durable and corrosion-resistant Cerakote finish on the barrel and action components to ensure a long-lived finish even in the toughest conditions.

Another slick feature we find useful that is common to all models is the buttstock. Pop off the rubber Stow-N-Go buttpad and use the hollow buttstock to store your tools, cleaning, and charging supplies (wrap them in cloth, of course, so they don’t make noise).

Modern in-line muzzleloaders have benefited from major refinements in the last decade or so. We still like to take the sidelocks out and run some ball-and-patch when we’re feeling nostalgic, but when serious hunting is the game, we want every advantage we can get, and don’t want to pay too much for it. The Vortek StrikerFire by Traditions Firearms satisfies both requirements.