If you’re looking to maximize your bowhunting time and efficiency this year, you need to see this…

Veteran bowhunters know a few things. Well, they know many things, but two things in particular are that 1) being effective in the field requires a serious investment in practice time, and 2) getting a bow set up and keeping it in peak operating condition are heavy investments in both time and money.

The truth is, our time and resources are precious commodities, and anything that helps us spend more time in the field AND become more effective hunters is what we’re all about. And if improved bowhunting efficiency can be combined with a new and exciting way to hunt big game…hey, we’re all in!

The new and exciting thing we’re talking about?

Rules and regulations are changing rapidly across the county as game departments continue to open and expand crossbow hunting seasons, making crossbows a feasible option for many of us. That’s great news for veteran bowhunters looking to do something different during archery season, and for traditional gun hunters who want to expand their hunting opportunities into the early season.

There are several avenues to get into the crossbow game, but from our personal experience, buying the highest quality, all-in-one package you can afford is the shortest and most financially sound path to success.

That’s exactly what we did last year when our state made crossbows legal to use during the traditional archery season. After looking over several models from various manufacturers, we settled on the TenPoint Titan. Several factors influenced that decision. First, the TenPoint brand’s solid reputation for engineering quality instilled the confidence we needed to make the investment. Second, all TenPoint crossbows are manufactured in the USA, not in Asia. Third, TenPoint offers its bows in ready-to-go packages, with your choice of cocking mechanisms. Simply assemble the crossbow (unless you buy it already assembled from the dealer), fine-tune the sight, and add the broadheads of your choice. That’s it. You’re ready to hunt.

As it turns out, we may have jumped the gun a bit. At this year’s Archery Trade Association show, Tenpoint introduced two new crossbows that sit in the company’s “price value” space. First is the Titan SS—the successor to the Titan Xtreme we bought last year. Second is the Turbo GT. They looked great and sounded impressive on the trade show floor, but we really wanted to try them out and give our HuntDaily readers the first-hand scoop.

The Turbo GT is the faster of TenPoint’s two “crossbow on-ramp” models, capable of delivering a shaft to the target at an impressive 360 FPS. It’s built on the adjustable Fusion S stock dressed in Mossy Oak Break-Up Camo, and weighs a comfortable 6.5 pounds without accessories.

The business end of the Turbo GT is the XLT bow assembly. Like all of TenPoint’s XLT bows, the Turbo GT has a 13.5-inch axle-to-axle width when cocked, and utilizes 11-inch, double-laminated limbs tipped with MRX cams that guide a D-75 string and cable. That narrow width goes a long way when you’re still-hunting through brush or working in the tight confines of a pop-up blind.

TenPoint crossbows all share several core features we like that help put the Turbo GT firmly in the “premium” camp in spite of its entry price point. These include:

One of the big advantages of TenPoint’s approach to crossbow outfitting is their soup-to-nuts packaging. Our Turbo GT came with TenPoint’s 3xPro-View 2 scope pre-installed and “bore-sighted” from the factory. At 20 yards, our first two test shots were an inch high and half an inch to the left. Pretty impressive for out-of-the-box performance. 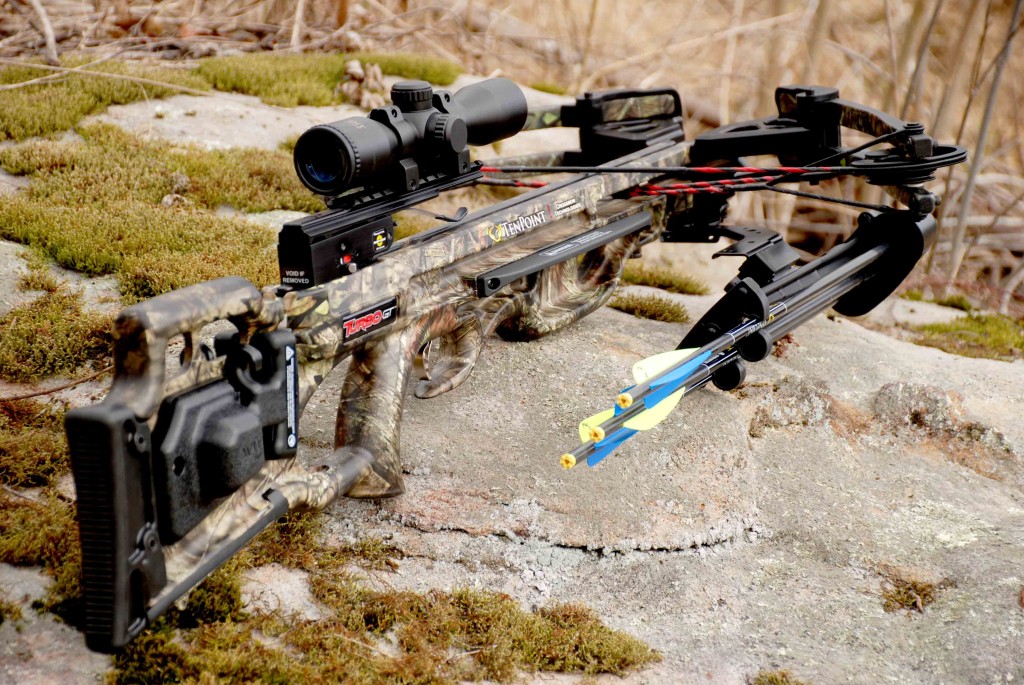 After a few fine-tuning shots, we were cutting Xs. Also included were three Pro Elite carbon arrows with field tips, a three-arrow detachable quiver, and an ambidextrous side-mount quiver bracket. So, when we say these crossbows come with everything you need to start hunting, with the exception of broadheads, we mean it.

Although the Titan SS carries the Titan moniker, the 2016 version is not a minor upgrade from the previous Titan model. This is an all-new bow that, like the Turbo GT, is based on the Fusion S stock with the adjustable buttstock. Furthermore, the new Titan SS has several advantages in the specs department that are welcome upgrades from last year’s Titan Xtreme. 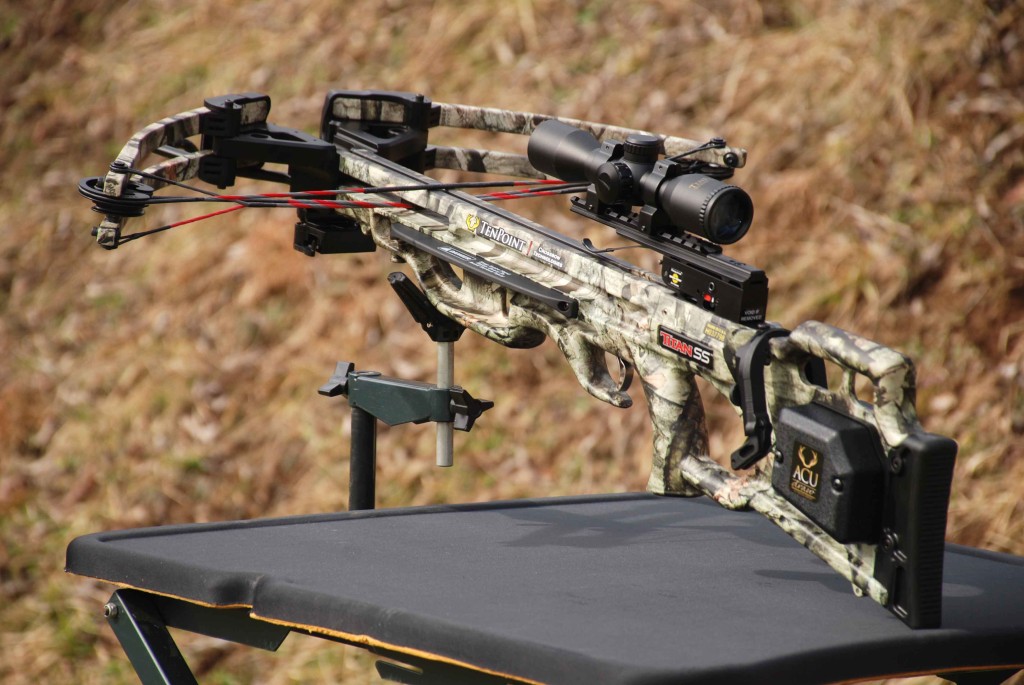 For starters, the bow is three inches shorter in overall length at 35 inches. Weight, without accessories, is now 6.7 lbs (versus 7.3 lbs), the 12.5-inch powerstroke is slightly shorter, and the draw weight has dropped from 180 lbs to 175 lbs. In spite of the reduced weight, the Titan SS shoots a pleasing 340 FPS (up 7 FPS) with 370-grain arrows.

As with the Turbo GT, the Titan SS comes ready to hit the field (minus broadheads), and includes the factory bore-sighted scope, three-arrow detachable quiver, three matched arrows with field points, and the Mossy Oak Treestand camo pattern. 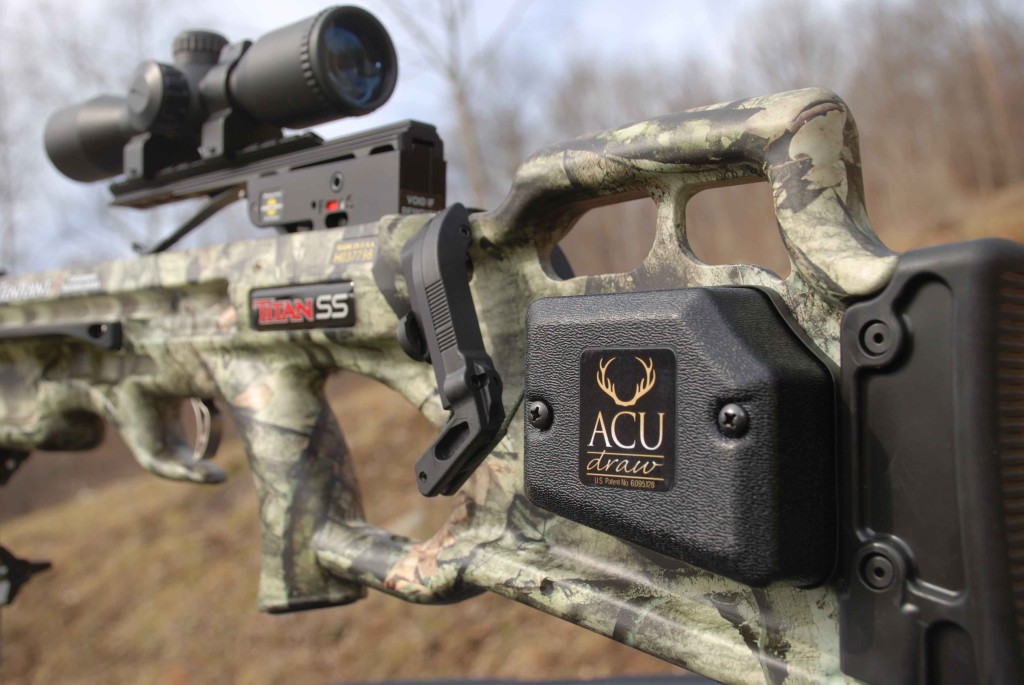 Our Titan SS test model came with the ACUdraw cocking mechanism. This mechanism is affixed to the stock and utilizes a winch-type system that reduces the drawing weight to about five pounds. You can literally cock the bow with one finger. Having been used to the ACUdraw 50 system (which is a rope-type cocking device that reduces the draw weight by half), the ACUdraw seemed a bit cumbersome, but after shooting a few rounds, the routine became effortless.

The bowhunting landscape is changing, and crossbow hunting figures prominently in that change. With a crossbow, you have the opportunity to enjoy more time afield without the need for hours upon hours of target practice, and for some hunters, a higher success ratio. The good news is that TenPoint has delivered two exceptional keys for you to open the door to hunting with a crossbow—the Turbo GT and the Titan SS. Sure, you’ll pay a little more, but you’re buying a premium product that comes with everything you need to get started.

That’s the kind of one-stop-shopping we’re talking about!